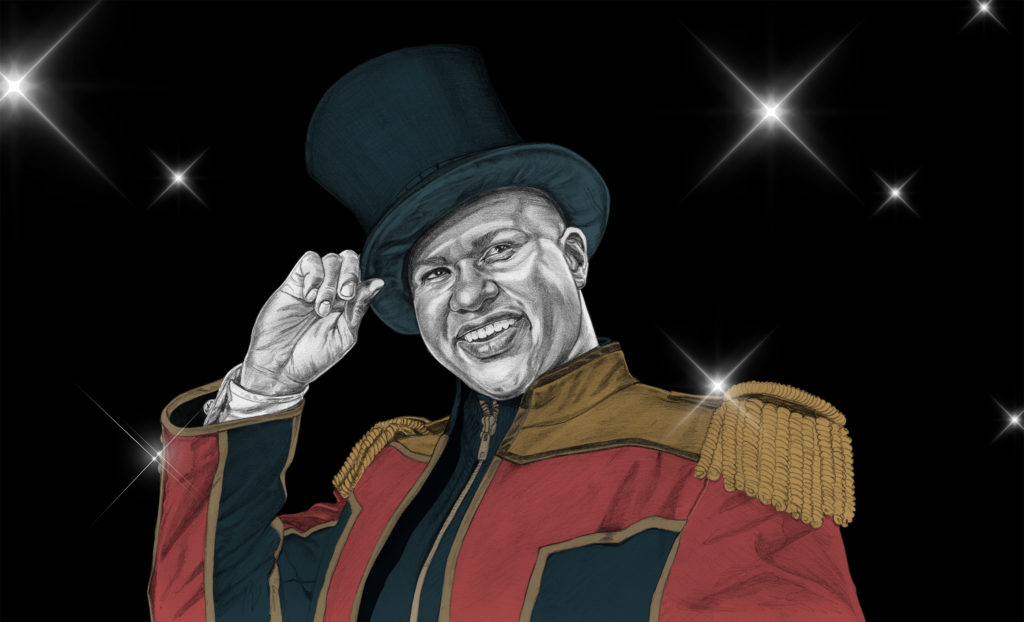 November 29, 2019Johnathan IversonMedia Coverage
Wealthsimple is an investing service that uses technology to put your money to work like the world’s smartest investors. In “Money Diaries,” we feature interesting people telling their financial life stories in their own words.

I was the first African American ringmaster for Ringling Brothers and their youngest ringmaster in history when I joined the circus at age 22. I’m 43 now, but in black years I’m still 28. You don’t know what black years are? Well, we age slow, black people. I don’t look 43. It’s vampire blood or something, man.

I grew up on 103rd Street on the Upper West Side of Manhattan. My father was a firefighter who had emigrated from Trinidad and Tobago. He was a very practical immigrant; fortunately, my mother was not a dream killer. She was always open to whatever I was into, as long as it was legal. I heard about Boys Choir of Harlem through my godmother — I only wanted to do it because I’d always wanted to travel. So I auditioned, got in, and realized it was actually serious work. I didn’t do anything else for 18 months. You had to earn your spot, and there were different tiers, so in order to get into that top tier, somebody had to get sick or die. Fortunately, one of the guys got sick.

I decided I wanted to be an opera singer at 13. By chance we were on the same bill in Japan as Plácido Domingo for a special concert for Ronald and Nancy Reagan. An older guy in the choir said, “Hey, I want you to hear what a real tenor sounds like.” And they introduced Plácido Domingo. And I swear to you, it was like one of those experiences where everything in the room went black except for him. I wanted to be a star. I wanted to be rich, of course. So after graduating from The Hartt School of music at the University of Hartford, my goal was to go to Europe to further my opera studies.

There’s this saying in the circus, “Once this sawdust is in your veins, you’re never the same.” And it’s true.

I needed to wrangle up some money for Europe, so I ended up auditioning for the Fireside Dinner Theatre, which is out in Wisconsin. It just so happened that the director for the Dinner Theatre was also directing Ringling Brothers. He loved my audition, told me he wanted me for the Dinner Theatre, and then said, “But one more thing — I’d like you to consider auditioning for ringmaster for Ringling Brothers.” It felt like somebody had asked me to join the CIA. He told me how stiff the competition would be. I was up against like 30 others. I auditioned three times, and the third time was the charm. I said, “OK, I’ll do this for a couple years to get enough money and then go to Europe.” But there’s this saying in the circus, “Once this sawdust is in your veins, you’re never the same.” And it’s true. My two years turned into 18.

The first tour was challenging because the conditions were a singer’s nightmare. You’re traveling from city to city, different climates all the time, the buildings you’re playing in weren’t the best as far as ventilation and cleanliness were concerned. And then you stick animals in that, which I was allergic to — the tigers, the horses, the whole bit.

You don’t go into the circus to get rich, but you can make a good living.

I left in the middle for about four years. I was just tired and wanted to try some other things. I did the performance thing, hustling, and got a show here, a show there. But performing elsewhere was really boring. I realized I didn’t care to do anything else because there’s nothing that compares with your coworker being a five-ton elephant. I realized I had the opportunity to perform for massive amounts of people — my voice has probably been heard live by more people than your average pop star. A lot of people in show business will never know what that is. I still get inquiries and letters and emails from people I interacted with when they were children. This one guy wrote me recently from college and told that he wrote to me when he was a boy, and I wrote back to tell him to dream big. He framed the letter and would read it to inspire himself. I was stunned by that.

You don’t go into the circus to get rich, but you can make a good living. I made a good salary — six figures with benefits. And considering all the other amenities, it really was great. You lived on the train, so you didn’t have any overhead to think about, except maybe a cell phone if you wanted one. And then I got married to Priscilla Costa. I met her through a Brazilian acrobat when I was on my first tour. I was seeing a Russian acrobat at the time — in the culture of the circus, there’s always that kind of light sexual tension in the air because you’re around gorgeous people. Then in Hartford, Connecticut, I approached her and I just laid it out. I said, “I think it’s clear we have some sort of attraction here.” She kind of looked at me like I had two heads, but then she went back into the dressing room. But we began to date, and it happened really rather quickly. We got married one day between shows. Matthew was born in 2005 and Laila in 2009. They both basically grew up on the show. I used to joke that the train was set up like any city with good and bad neighborhoods. We were in the high-class area of town because we had a private car like the managers. But the clowns had their own clown car and shared a communal kitchen, crew, concessions, the band, the dancers too. And that’s how we lived for a long time.

It was on January 14, 2017, in Miami, when Feld Entertainment CEO Kenneth Feld made the official announcement that we were closing. And that was it.

In some ways I saw it coming. You could see that the show had been lagging, that the audience just really wasn’t there, there were empty seats. The elephants left the circus the year before and that certainly didn’t help — the animal rights groups were already part of the circus culture when I started in 1998. We probably spent $65,000 a year to take care of each elephant. One elephant drinks hundreds of gallons of water and eats hundreds of pounds of food a day. Their medical care was almost overzealous. We had vets, vet techs on call in every city. The elephant is the one of the smartest animals on the planet. Did you think you can brutalize or deprive an animal of that size and that intelligence into doing the same exact routine night in and night out? It’s not even possible. Now, is that to say there aren’t shows that have had incidents? I’m sure there are, but not the shows I was in, not involving the trainers I knew.

I think one of the things I learned the hard way is how financially illiterate so many of us are. One of my definite regrets is that I don’t think I was as good of a financial steward as I could’ve been while I was at Ringling Brothers. We didn’t leave broke, but I could have done much better had I educated myself more.

We’re living in Orlando. We have friends down here from the circus. When we moved here, I had a promising opportunity I’d hoped would work out. I was flown out for an audition for NXT, which is basically the minor league of the WWE. They develop personalities there, and then you’re off to the big show. It’s an awesome company. So I did the audition and the whole thing. Great people. It’s just that the offer wasn’t something I thought would be suitable for somebody with my experience. It just wasn’t feasible. It was an entry announcer. They offered basically $50K. No benefits. I weighed the idea. The exposure would be massive, and honestly, I wasn’t expecting what I was getting from Ringling right out of the gate — I get that I’d have to learn a new business. But my biggest hurdle right now is my legacy. I’ve put a lot of equity into what I am, so I just can’t go and accept anything. Because if I do that, it mars your legacy. It just reduces what you were. I’d be happy if we could work something out in the future. I’d be happy to reconsider.

Priscilla is teaching dance at a studio that her friend owns. I did a show over the holidays at Sea World; it’s one of those shows they have at theme parks that centers around the Christ story, but it’s told by the animals who were in the manger. I played the innkeeper. It kept me busy, and I was getting an hourly rate that would come out to several hundred dollars every two weeks. But the problem with Orlando is you can’t make a living working in theme parks as a performer. Every performer I know here says, “Well, I perform. But I also do real estate…” or whatever. So for a while I was selling toys. A buddy of mine is a VP at a toy company, so I was selling toys by day. I was able to do it from home, which was a very good thing for me because I didn’t want to go to some office and then have some audition or something come up that I couldn’t get to. Basically, they give you a call sheet and you call stores to see if they want to carry everything from Peppa Pig to Road Block. So we’re on that health insurance for now, but when I discontinue that job, I’ll probably apply for Obamacare or something. I gave a TED Talk recently at Harvard about life detours. I’ve also been hosting events. I hosted the Yavapai Big Brothers, Big Sisters annual gala out there in in Prescott, Arizona, and another one for some realty company that had its annual awards banquet ceremony. Those gigs range from $500 to $2,000. Usually they want the freaking costume, and I’m like, “I don’t own the costume!” Eventually, I’ll have a costume or two built for me because that’s still the thing that’s in demand. My wife’s also been on me about creating a show for a cruise ship. A lot of cruise ships hire guest talent.

You could see that the show had been lagging, that the audience just really wasn’t there, there were empty seats.

Me and my wife talk about gratitude all the time. People may have all their financial needs met, but maybe their family sucks; or their finances are great, but then their kid gets sick — somebody’s always battling something. It’s like the famous saying goes, if everybody came out in the courtyard and threw their problems down, everybody would walk away with their own problems because nobody would want to trade. I’m sure it will pick back up again.

As told to Andrew Goldman exclusively for Wealthsimple; transcript edited and condensed for clarity. Illustration by Jenny Mörtsell.