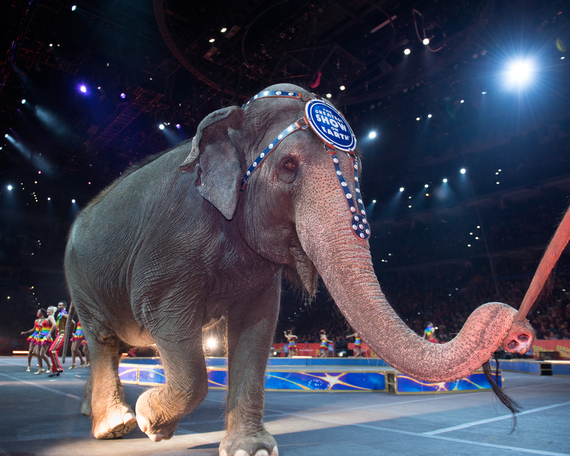 We know change is the only constant in life, and yet we are always rattled to some degree when it arrives. Ease and familiarity is what we crave most, yet ease and familiarity defies what it is to be alive. It is therefore an unrealistic hope so many of us are guilty of clinging to. I came to realize these truths more clearly, like so many of my colleagues in the past year have, when it was announced that Ringling Bros. and Barnum & Bailey® would be retiring its most celebrated stars — the elephants. Though we are in the business of eliciting the impossible and molding what Ernest Hemingway called, “a truly happy dream,” when the glow of the lights dim and the sawdust is swept away, we must all awake from our feats of flight, our brazen courage to dare, and sacred and magical communion between species, to the reality of life’s one great constant — change.

I’ve become a committed realist as of late. I suppose this latest chapter in the storied history of Ringling Bros. and Barnum & Bailey has caused me to do so. As a committed realist, I’ve accepted the fact that evolution will happen with or without me. We leaped from big top tents to arenas. We’ve gone from a solitary entity to multiple units. We downsized from three rings to one. Without exception, every single transition, including broadening the diversity of the company, was met with everything from vehement outrage to pronouncements of our end. However, if I may be so bold as to paraphrase the great American scribe Maya Angelou, “Still [we] rise!”

By now every sentiment imaginable has been expressed. Everyone from media talking heads to the personnel in the many venues that welcome us have voiced various opinions about the exit of the talented giants. For the past year it’s almost become routine to receive drawings or letters from our younger fans, at every show, either wishing the elephants a fond farewell or petitioning The Greatest Show On Earth® to change course. 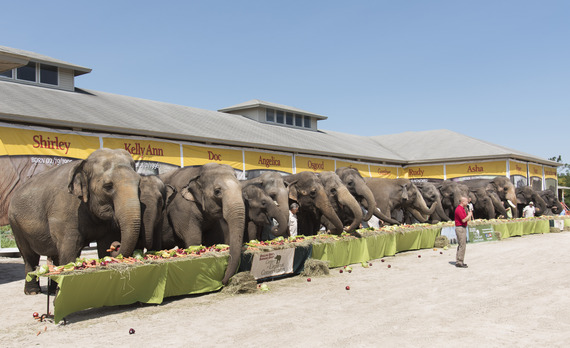 Those of us who’ve been privileged to bask in their company day after day, year after year, witnessing their genius and spell upon the public, now recognize their hold on us. I’ve known Brett Barlow, conductor for the Ringling Bros. and Barnum & Bailey Band for nearly two decades. His is not a position one can “phone it in.” It requires, among other things, an exhaustive ability to be alert, think on your feet and to steel oneself amidst the unexpected. Barlow possesses these traits in spades and yet, in a recent conversation he conceded, “I’m thankful for the things that remind me that I’m not that tough, like tearing up every time the elephants go on and then off the floor. It makes me alive a little more.” As production manager for Ringling Bros. and Barnum & Bailey, Priscilla Iverson is responsible for overseeing every ounce of this multimillion-dollar extravaganza — from performers, both human and animal, to lights, sound, equipment, wardrobe, sets, props and every crisis in between, in addition to being my wife and the mother of our children. She’s easily one of the hardest-working women in show business and thus, her time is severely limited. However, there she was in the midst of a three show day, in her office where she was suddenly overcome with emotion. “Our elephants are leaving,” she cried.

It goes without saying that those who have worked directly with these beautiful giants, whose very lives have orbited their every care, have been the most personally affected. I’ve witnessed the commitment of our animal department, and it is breathtaking to say the least. Everything in their lives, including their own families, often took a back seat to their dedication to those animals. As star trainer Alexander Lacey once told me, “this would be a miserable job if you didn’t love it.” Circus thrives on the fact that everyone involved is properly placed. A daredevil is not a ringmaster, as a ringmaster is not a daredevil, as an animal trainer doesn’t fly trapeze; everyone knows who they are within the circle. Therefore, the care and training of an animal is not a cavalier thing by any means, and forging bonds and enjoying long-term success is impossible without adhering to the highest of standards.

Certainly, many of the trainers will make a way elsewhere, but therein lies a stubborn reality: relationships between living things, however nominal they might be, matter, especially when those relationships cease to exist. Sonny and Karen have such a relationship. Robert “Sonny” Ridley has been an animal trainer withThe Greatest Show On Earth® for over fifty years. He’s a man of very few words but many miles. Karen, now 50, is as gorgeous as she is feisty at 8,120lbs, and along with her fellow pachyderms, she is responsible for creating smiles for millions upon millions of circus fans. Their relationship goes back decades to when Sonny bottle fed her as a calf, and it is a bond that endures until this very day. Five decades of devotion is not a nominal relationship between trainer and animal, it’s a love story. I hesitate to imagine what each might feel at this hour. 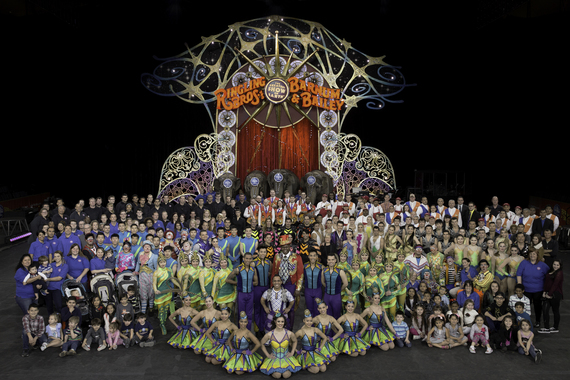 As this new chapter descends upon this great American icon, I’ve become aware of its effect upon myself. As the voice of this foremost national treasure, a reality that still causes me to pinch myself in disbelief even nearly two decades in, it is imperative that I am as aware of my state of being. Like any live entertainer I bear the burden of forsaking my personal realities for the sake of my unspoken covenant with the audience — respecting their time, money and imagination, as well as my responsibility to my colleagues and the company we collectively represent. I am aware that this is my loss as well. I am aware that they will continue to revel in the utmost care at the Ringling Bros. Center for Elephant Conservation®, as well as excel in their monumental role in groundbreaking cancer research, but I’ve accepted that there will be a very large and irreplaceable void in my life. I’ve never been very sentimental, and the idea of experiencing such a connection with other species was strange to me at best. However, my time and experience with The Greatest Show On Earth® has been a most remarkable revelation. A fondness, a love even for these species not my own, has bloomed in me over the years. To announce their entrance in the show or announce their arrival for one of our many Elephant Brunch events has never failed to electrify my entire being. It is the one time in the production that I’ve consistently experienced the show as a fan. I know I’ll miss everything about them, from their talents to their personalities, even their scent. To be in their presence is to be innocent again.

Excitement, doubt, and curiosity are expected as we venture toward this new era. I don’t know what the future will hold, but I do know that for over 145 years Ringling Bros. and Barnum & Bailey has made a tradition of re-imagining itself, all the while consistently creating unparalleled memories for children of all ages, for many generations. The show will go on, and it will continue to boast the world’s most renowned menagerie, even if it’s a lot lighter.