For eleven minutes during our presentation of The Greatest Show On Earth®, audiences sit spellbound by Alexander Lacey and his bevy of big cats. Eleven magnificent lions and tigers join the dashing British star in the center ring for one of the most timeless displays in all of circus. The scent of danger looms heavily throughout the venue. Instinctively, spectators become carefully measured in the expression of their excitement. They’re not nearly as liberal with their ecstatic utterances as they are for the other acts. After all, this is one man amidst numerous renowned predators. But tensions are cooled as audiences come to realize that the display before them is not a spectacle of man vs. beasts, but man in harmony with majestic creatures – creatures even as innately perilous as lions and tigers. 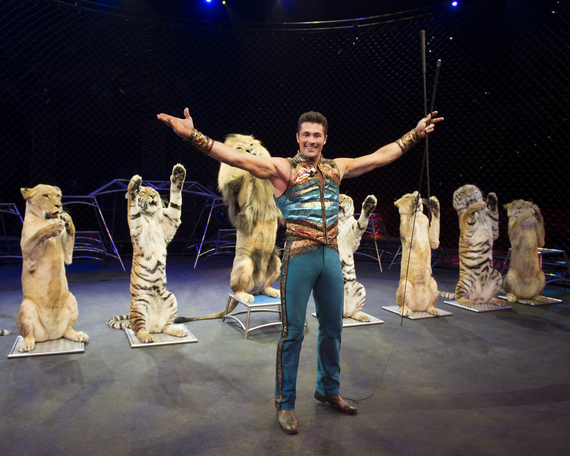 For eleven minutes, Alexander Lacey and his big cats display the benefits of a well-invested relationship. Effortlessly he conjures their athletic prowess. The big cats put the audience at ease further with their more tender side, as displayed when Alexander smooches them liberally – on the mouth no less. Their personalities are as charming as they are stately. Goldie, a beautiful lioness, refuses to exit unless the handsome Alexander rubs her belly. Max, a fine and feisty male tiger, can’t help but leave audiences smitten by his glorious height, which easily dwarfs Alexander. Then there’s the regal Masai V. He looks every bit the king of the jungle with his luscious, thick mane and his shimmering coat. His very presence is its own thrill, which he casually and hilariously reminds Alexander of. “It’s not about me. I want people to see our friendship,” says Alexander.

The genesis of this bond began when Alexander was a child in his native England, where his parents owned two zoos. Although the compulsion for a life with animals was clear to the youth, his parents were adamant that he was not at all entitled. “My parents deemed it a privilege, not a right to work with animals,” says Alexander. Like any reputable animal trainer, life with animals begins with the care of animals. For Alexander, it would be several years before his parents would begin to instruct him. “This is not about being in the spotlight,” he says. “You have to be devoted. If you are dedicated, it produces an amazing bond and perhaps a great act,” he says.

There is a process that enables those eleven extraordinary minutes in center ring. For within that process there is a relationship that is being nurtured from a lifetime of devotion. “My whole life revolves around my animals. For the past 22 years I’ve been devoted to my animals more than my own human family,” he says. Alexander is a man in constant motion. Rarely have we had an exchange that was not in passing. He seems to always be on his way somewhere and that somewhere is almost always where his animals are. “With the big cats you have to be a leader. You earn their respect by the way you train them,” he says. “There’s no big secret to animal training – it’s repetition, reward and patience.” 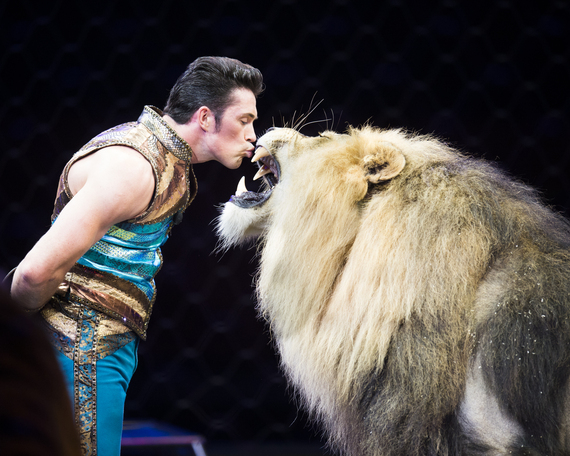 Mornings begin with an assessment of each and every animal’s physical and mental wellness. Practice may go from 30 to 90 minutes. In total there are 16 lions and tigers and 1 leopard. This includes two recent retirees who are over twenty years old that join Alex and the other big cats during practice. “You won’t see 22-year- old big cats in the stellar condition ours are in. It’s the physical conditioning and mental stimulation that make it so,” says Alexander. “These are living beings. They’re not meant to be languishing. They’re entitled to learn and to be stimulated. That’s what makes the circus so great – this week we’re on gravel, next week we’re on grass, another week we’re near a forest, another week we’re near an airport. The constant change of environment is very stimulating, because the animals see, smell and hear afresh all the time.”

Each of the big cats is fed 16 pounds of high-grade meats per day. They’re also watered throughout the day and groomed. Alexander personally brushes Masai V’s mane before every show. The cats have the option of roaming about and playing within their enclosures, but much like their wild counterparts they prefer to sleep most of the day. 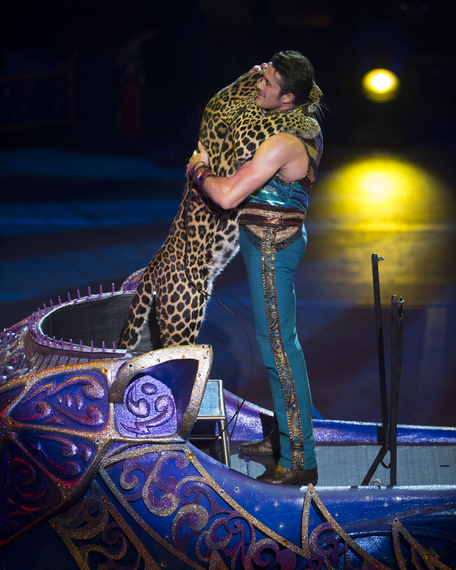 It is clear to anyone who has been privileged to see Alexander and his big cats atRingling Bros. and Barnum & Bailey®, either during the show or at one of our many Animal Scout Clinics that their rapport is one of mutual respect, even adoration as is expressed in the hug that is exchanged between Alexander and Mogli, the leopard. “When I was in school, I loved biology, physics and geography – probably the three most boring subjects on the planet,” Alexander laughs. “But, the reason I loved those subjects is because my teachers taught them in such a way I enjoyed them. I looked forward to going to those classes. It’s the same with the animals” he says. “It’s your responsibility as a trainer to keep the animals in your charge stimulated. It takes a long time to gain that respect and trust.”