We met over 13 years ago upon my return from a very brief vacation following the conclusion of my first tour, Ringling Bros. and Barnum & Bailey Presents The Living Carousel.  The company was abuzz about our new arrivals, Brazilian dancers. At least the men were. After all, who hadn’t heard of the stunning beauty of the Brazilian woman? Young, single and in the spring of youth I could be counted among the very anxious males awaiting the much anticipated arrival of these renowned ladies.

I arrived at our spotted train in Tampa, FL and noticed them immediately. I wasn’t impressed, at least not initially. They were all standing outside the train waiting for a ride to our rehearsal facility, when the tall one approached me with a rather surly demure. She wasn’t rude, but she wasn’t particularly pleasant either. She needed to use my phone. I hesitated wondering to myself, “is this the Priscilla Felipe raved about?” Again, I wasn’t very impressed, at least not yet. I allowed her to use my phone I believe. The next time I would see her and the other ladies would be during orientation and our first rehearsal.

From the start she was a leader. She was both dance captain and translator. She immediately won over the confidence of the creative and production staff. It was clear even then that her responsibilities would certainly expand. That was very impressive. Time and Seasons have a peculiar way of broadening ones vision. Mere months into the tour and suddenly I began to understand what my friend Felipe was raving about.  Felipe was a performer on my first tour who hailed from Brazil. Like Priscilla he too had been a dancer and happened to know her. Anticipating the arrival of the Brazilian ladies, he’d tell me over and over, “Priscilla is the one and she’s going to like you too.”

She and I engaged in what I like to refer to as a very careful pre courtship of innocent flirting and sizing each other up.  I sensed how powerful she was and how stubborn too, and I liked it. I found myself consumed by the thought of her more and more each day. By now she knew this and wasn’t shy about expressing how she felt about me, yet, she made it clear she didn’t intend on being a mere Cheerleader for the Ringmaster. I suppose this meant I had to work.  Obviously someone had been blasting Madonna’s classic hit, “Express Yourself.” Fair enough.

Our courtship commenced that Spring, our romance bloomed in the Summer and our wedding was in the Fall, in between shows in a suite during our run at Chicago’s legendary United Center. We’d only found the minister the day before. She happened to be attending our morning show the next day, so we enlisted her services after the show.  Our journey of over 12 years has taken us through plentiful times and very lean times. My mother often quips, that marriage is for crazy people, “marriage is one thing it’s that becoming one that’s the problem.”  Somehow we two stubborn souls have endured each other. We’ve even had two lovely children join us on our journey, Matthew Felipe, named after our friend Felipe who played prophetic match maker, and Lila Simone, named after one of my wife’s dearest childhood friends, Simone who left us way too soon.

Upon returning to The Greatest Show On Earth in 2009, Priscilla would be rehired as a dancer, not a dance captain. However, a leader is a leader is a leader. The following year she was made Line Captain, a dance swing who also aided in overseeing the staging of the show, assisting both the Production Manager and the Associate Production Manager.  Over two years later she would be promoted to Associate Production Manager. Recently and rather suddenly she was promoted to Production Manager of Ringling Bros. and Barnum & Bailey Presents Legends. What made it all the more special was the outpouring of respect and warmth she received from her colleagues, both cast and crew. She had earned it the good ‘ole’ fashion way, hard work and dedication and everyone respected her for it.

Always conscious of the state of our relationship and our family I recall her hesitancy at taking the Associate Production Manager position. She worried if it would affect our dynamic as husband and wife, being that she would be my authority at work. I immediately reminded her that we’re partners. Her promotion, just as any advancements I might make, are ours.  I delight in her growth, her work ethic and leadership. She’s my Claire Huxtable come to life and I couldn’t be prouder.  It 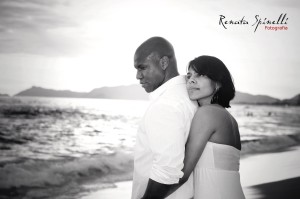 amazes me that my children were birth at a time when such advancements don’t seem so unlikely. What a tomorrow that awaits them. They’re duel citizens who live in a time where their President here in the United States looks like them and their President in Brazil is a woman. They are immersed in a multi cultural, multi racial oasis, where women including their mom, own, operate, and manage one of the world’s most endearing and enduring extravaganzas. Theirs is a tomorrow with no concept of limits.

Of all the decisions I’ve made marrying that tall one I met over thirteen years ago has got to be the best.  She’s the gift that keeps on giving and I am elated she allowed me to be her husband and am proud to call her Boss.