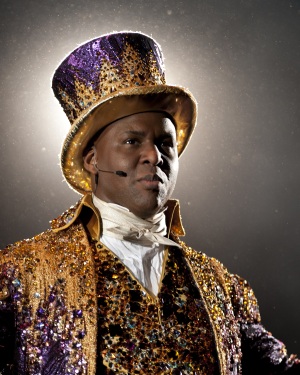 Seven Words that Bring Goosebumps to a Ringmaster

Amid the spectacle that is the longest running hit show in the history of the world — Ringling Bros. and Barnum & Bailey, The Greatest Show On Earth — is indeed an opulent torrent for the senses. Where else can you truly appreciate your sense of smell, if not the circus? How can you keep your hands to yourself before a legendary array of vintage costumes, adorable fuzzies, and all sorts of floats and props to admire?  What’s not to see? People fly, they talk to animals and the animals seem to talk right back, they will their bodies to perform unearthly feats, and appear to dally with fate. Popcorn, snow cones and that famous cotton candy, of course, you want a taste! But, alas the sights, the taste, the scents, the touch, the magic and majesty of The Greatest Show On Earth all have their beginning via the sound of arguably the most enduring and endearing seven words in entertainment:“Ladies and Gentlemen, Children of All Ages…”

I am one of 38 individuals in the history of Ringling Bros. and Barnum & Bailey privileged with uttering those famous seven words that have brought The Greatest Show On Earth to life for nearly 150 years. “I get goose bumps…the hairs on my neck stood straight up…every time I hear those words I become a kid again…” are common testimonials. For those seven words are not merely the start of a show, but the promise of something extraordinary. As for the ever seeming presence tasked with rendering this iconic utterance, perpetually giving birth through the spoken word and melodious song to one spectacle after another, convincing one and all, that the men, women, and animals that they see are something far more than their earthen shells, I implore you, be not deceived by his bombast or airs, although he is the Ringmaster, at heart he is a glorified fan, who is as amused, awestruck, and dazzled as you.

Long before I ascend atop my float and bark those seven words, adorned in the classic top hat and tails, our efficient crew of men and women will have transformed an uneventful space into an oasis of merriment, allowing audiences to safely enjoy delightful festivities even prior to the show. In the Animal Open House they will meet members of our renowned menagerie and learn of their world-class care and training courtesy of the most revered experts on the planet, like third-generation elephant expert, Joey Frisco. During the All Access Pre Show, audiences will meet the stars of the show, try on costumes, and even witness the artistry of one of our treasured elephants.

As with every show, we will honor our great nation with the Star Spangled Banner. Upon its conclusion the lights will dim, we’ll strike up the Hardest Working Band On Earth, and the anticipation of all in attendance will commence. Silence will descend upon the arena, save for one lone drum roll, then:  “Ladies and Gentlemen, Children of All Ages…”

An impossible universe will explode into existence, where a man barely 4’0” tall will display gigantic feats, the First Family of Daring will speed furiously through the menacing Globe of Steel, the King of the Big Cats, Alexander Lacey and his feline companions, will leave observers spellbound, the Solar Hawks will take flight in a brilliant display of aerial power, while the fearless Cossacks will charge gloriously upon their mighty steeds. These and so much more await one and all to see, at the behest of seven wondrous words.

Johnathan Lee Iverson is ringmaster of Ringling Bros. and Barnum & Bailey circus. He is the first African American and the youngest ringmaster in the history of the circus.