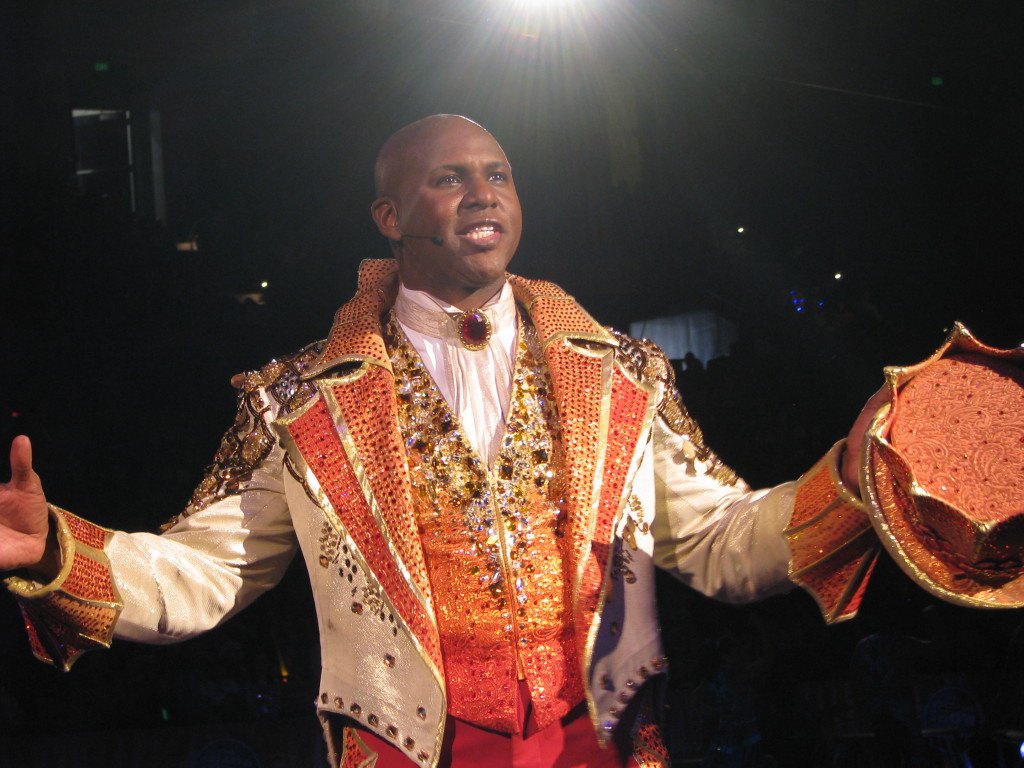 The youngest ringmaster in Ringling Bros. and Barnum & Bailey history on finding love under the tent, dealing with tragedy and the irrational fear of clowns

How does a kid from New York who sang in the Boys Choir of Harlem end up a circus ringmaster at age 22?

By accident. I was studying to be an opera singer at the Hartt School of Music in West Hartford, Connecticut. After I graduated, I happened to audition for a dinner theater whose director also happened to be a director for Ringling Bros. He asked me to audition. I was up against 30 people and, fortunately, I got the part.

So you didn’t always dream of running away and joining the circus?

Nobody does. Clowns and trapeze artists are the only people who do. It was never even in my consciousness. Obviously I like it; it’s my 16th year.

You probably didn’t imagine you’d meet your wife, who was a dancer with Ringling Bros. and now serves as a production manager, at the circus then?

Not at all. I was a swinging bachelor, or was trying to be. I thought: Ringmaster—that’s a great pickup line. But it wasn’t something I ruled out. It was definitely a possibility—everybody’s exotic around you, everyone’s different and dynamic.

You always fall in love with a person’s humanity. … You can’t explain it. You just connect. My wife and I just connect, and it’s sustained us for 13 years.

A swinging bachelor? Is the circus a great place to pick up chicks?

Let’s be real: I was 22 with new money and a great job that was taking me all over the country. You’re an intricate part of one of the world’s longest-running hit shows. When you’re [living] that, your brain is, Hey, where’s the party? I think it was just an age thing.

The only thing I would give myself credit for is that I didn’t do anything stupid. I didn’t do anything that would jeopardize our brand or my image. Just look at the NBA. As long as there are twenty-somethings with some money and great gigs where girls just swoon, they are going to be [temptations] out there. You just have to be educated enough and raised in a way that whatever you’re into doesn’t overcome you. I think the best decision I made in my life was my wife. Once I connected with her, that was it. Game over.

Any close calls with the animals in your 16 years on the job?

No. Animals are the most predictable things here. As long as they’re fed and pampered, they’re fine. It’s the two-legged mammals you have to worry about. I have a very safe job. The worst thing that’s happened to me is that I pricked my finger on my costume with all those rhinestones.

So what’s the toughest part of the gig?

The job is more emotional. The toughest part is keeping yourself contained and keeping a supple mind, because your show is always changing. It’s a living, breathing thing. You’re dealing with humans, you’re dealing with animals. You have to be really agile, be able to adjust in the event of an accident. You have to, unfortunately, be able to disconnect in those moments. You can’t say, “Oh my God, these are my friends,” as we recently experienced. You have to deal with it with the audience in mind. It’s really a mental thing.

You’re referring to the nine Ringling Bros. performers who were seriously injured in May during the “human chandelier” act. You wrote about the accident in The Huffington Post. Why was it important to share your side?

We haven’t always been good at telling our own story. When people don’t know something they mythologize it, they romanticize. It really in a sense [allowed] me to process it and really understand it. It was therapy for me, and other people needed it, too. We had a worldwide community of concern for the ladies, and I felt it necessary to express what we were going through. It was one of the biggest [accidents] in our history. Being the voice of the show, you are given that responsibility of explaining what things are like here, and what our world is like. It was only right that I express myself.

Are there any acts you’d like to try yourself?

No. I’m not crazy. I’m a singer, I’m an orator, I’m an actor. That’s what I do. You won’t get me on a high wire; you won’t even get me to put on clown makeup. There are people who are gifted. That’s their thing, and that’s what works. As an audience you’re guaranteed to get the best of what people have to offer, because when people are operating in their purpose, they’ll give you more than what you’d imagine. That’s why [Ringling Bros. has] been around for 145 years. That’s longer than Coca-Cola, longer than Major League Baseball.

Lastly: Why are so many people afraid of clowns?

My theory has always been that movie It. Stephen King screwed us up. I’m sure that [clown] phobia’s been around longer than that, though.

Clowns are regular people with feelings. They’re friendly, and they don’t bite. Come out to see the show. It’s one of the best ways to get over that fear.

All About That Bass