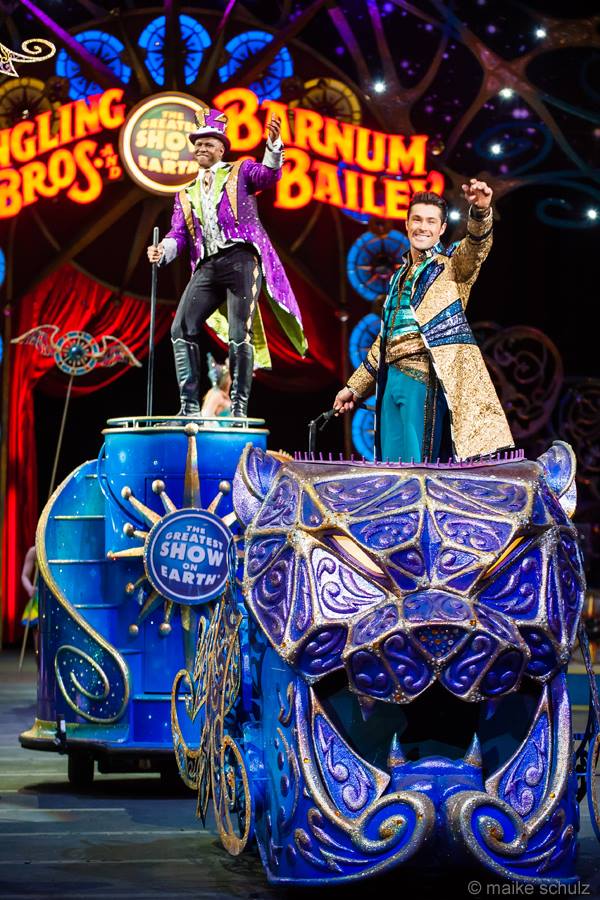 BY MISHA DAVENPORT | FOR SUN-TIMES MEDIA

You can’t think “circus” and not think “Ringling Bros. and Barnum & Bailey.”

The 143rd edition of the theatrical performance event pitches its tents in the Chicago area for a month’s stay beginning Nov. 6.

Iverson, who became the first African-American ringmaster of an American circus in 1999 and has been with the circus off and on since, said things are bigger and better this time around as this year’s production has been built to amaze from the ground up.

“This year, you will see people fly and do extraordinary things you did not think were humanly possible,” he said. “You will be amazed, entertained and hopefully enlightened.”

This year’s version of the legendary circus is called “Legends.” The plot explores both reality and mythology as Paulo (Brazilian actor Paulo dos Santos) encounters Pegasus, a unicorn and various circus legends and daredevils.

“Ringling Bros. and Barnum & Bailey is where legends live, and we constantly ask our audiences to believe in the unbelievable. For this edition we’ve combined a number of mythical themes and stories into a lavish production of sight and sound unlike any show we have ever created,” said producer Nicole Feld in a statement.

“Capoeira might be new to a lot of the Chicago audience and I am so fortunate to be able to demonstrate this art form from my native home,” dos Santos said.
Other highlights from this year’s show include renowned British lion tamer Alexander Lacey, daredevil Cossack horse riders The Riders of the Wind, and trapeze artists The Solar Hawks demonstrating a never-before-seen double-wide flying trapeze act.

It all adds up to what Iverson said is his “dream job.”

“As ringmaster, I am in between worlds. I’m part of the fantasy, but I am also a fan. I’m the best-dressed guy in the arena and I have the best seat in the house. I see what it takes to make the magic, and yet, it still is magical for me.”

“There is a real sense of family,” Iverson continued. “We live, work and play together. It’s like a Bebop band. We know each others’ rhythms and timing at all times.”

Iverson and dos Santos have also developed a strong friendship from working together.

“I am so impressed with what Paolo has had to overcome as a little person,” Iverson said. “He’s a national champion, a performer and actor and I am constantly moved when he speaks at afterschool programs regarding bullying.”

“This is a family,” dos Santos says. “We have respect for each other and for the art form. You can feel that in our hearts when we perform. Every show, we are giving the audience the greatest show on earth.”

That sense of family is also evident when Iverson talks about some members of the “Legends” show that are currently missing from the production.

“One of the biggest challenges we have faced recently is going back out and performing when we are missing part of our family,” Iverson said, referring to the members of the Medeiros Troupe, including Champaign, Ill., native Samantha Pitard. Nine members of the aerial act, in which performers hang above the circus floor by their hair, where injured in May when rigging broke free and fell, taking the performers with it during a performance in Providence, R.I.

In a written statement to the Sun-Times, Ringling Bros. indicated one of the members of the troupe has already returned to the circus, albeit in a different role. The remaining eight performs continue to recover.

“Our thoughts and prayers are still with them,” Iverson said. “Not a performance goes by that we don’t realize we are still missing out ladies.”