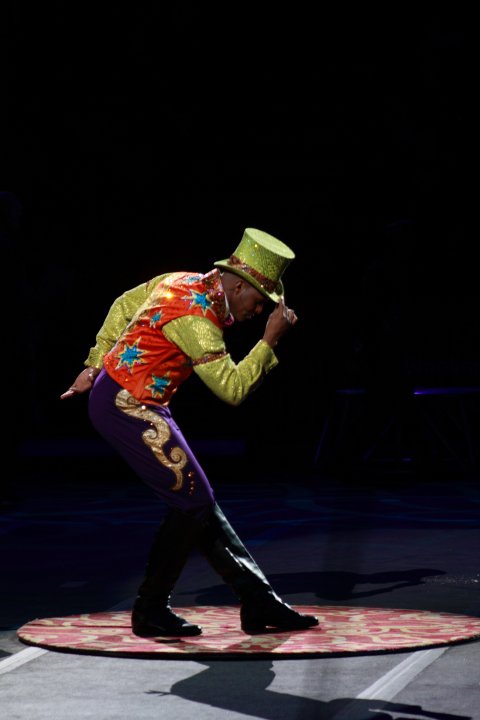 Johnathan Lee Iverson is the luckiest man in show business. For 48 weeks a year, he is in a different U.S. city in front of bright spotlights, wearing a radiant smile underneath a top hat, entertaining alongside a diverse cast in lively costumes and doing what he loves most – singing.

“I’m a fierce advocate for living out the best life you possibly can. There’s no glory in living beneath yourself,” says Iverson.

And rightfully so. The 6-foot-5 performer is the Ringling Bros. and Barnum & Bailey Circus’ youngest and first black ringmaster. The New York City native’s stellar voice – since the 129th edition – has been a staple in the 143-year-old Greatest Show on Earth’s celebratory, mystic and family-friendly production.

Iverson’s innate ability to mesmerize audiences is rooted in eight years as the Boys Choir of Harlem’s lead tenor. He trained extensively across various genres. He circled the globe to perform for various entertainers, politicians and world dignitaries. When Iverson performed for Lena Horne, he earned second prize in the entertainer’s vocal jazz scholarship. “She was such a gem, such a lady and so down home,” says Iverson. “It was one of the highest points in my life.”

The Boys Choir, Iverson says, was a combination performance vehicle and social program that conditions young black males to become productive citizens. “Those experiences fed my confidence to realize and know I could do anything,” says the ringleader. “It built our people skills. It was the springboard for everything I would ever do in my life. Not only that I could, I was entitled to believe that I could. It indoctrinated self-worth in us.”

His plans post-graduation from the University of Hartford’s Hartt School in 1998 was to sing opera and study in Europe. Plans changed during an audition for a dinner theatre. The director of the dinner theatre, was also director for the circus and convinced the then 23-year-old singer to audition.

Even Barbara Walters recognized Iverson as one of 10 Most Fascinating People of 1999. “I never perceived the circus as a career,” says Iverson. “It never dawned on me that it would be something I could possibly do. It’s a terrific form of energy that you get when you realize what you’re giving is a service when it’s your craft.”

Iverson draws his inspiration from a myriad of reference points, quotes and cultural moments. He even finds a parallel between his career and Beyonce’s Super Bowl XLVII halftime performance. “The circus is the celebration of living things at its best. We stretch the limits of the human imagination. I’m conditioned for what I do. It’s nothing for me to stand out in front of an arena of tens of thousands of people and serve them their imagination,” he says.

Iverson went on hiatus in 2004 but returned to Ringling Bros. in 2010. He pursued the off-Broadway stage, television commercials, animated film voiceovers and even freelance journalism under the pseudonym, J. Frederick Baptiste. He regularly conducts speaking engagements and mentors youth. Iverson contributed to Zane Massey’s 2012 anthology, Beyond The Statistics, a culmination of interviews and passages on fostering strong degrees of professionalism, spirituality and intelligence from extraordinary men of color.

Off-stage, Iverson is happy with paying his blessings forward. He believes success involves passion and encouraging others (especially young black males) to maximize their potential. “Whatever it is in you, trust it. Have the courage enough to pursue it. You will never be happy if you don’t,” he says.

Circus and the Healing Balm of Laughter