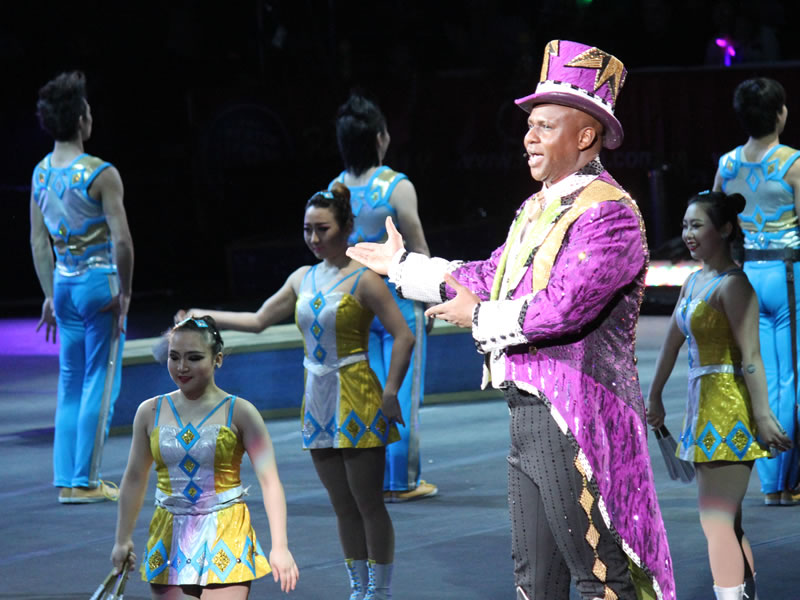 P.T. Barnum once said, “The noblest art is that of making others happy.” Ringmaster Johnathan Lee Iverson takes that quote to heart. A classically trained singer, he understands what so many successful artists and entrepreneurs discover, often later in life: that true success comes when the emphasis is on giving, making others happy, rather than self-promotion.

Johnathan Lee Iverson is the Voice of the Greatest Show on Earth. He began performing at age 11 with the world-famous Boys Choir of Harlem. For seven years, he was intensely trained in all forms of music including classical, jazz, hip hop and gospel. Johnathan experienced a string of unforgettable, inspiring moments as a member of the Boys Choir, which included being awarded the lead tenor role for the choir, singing at the intermission for Luciano Pavarotti’s Concert in Central Park, performing in a live show on Broadway for two weeks and winning second place in the Lena Horne Vocal Jazz Scholarship.

Johnathan graduated from the University of Hartford’s Hartt School in May 1998 with a degree in voice performance, and shortly after his graduation, Johnathan was invited to begin his professional entertainment career with the 129th Edition of Ringling Bros. and Barnum & Bailey®. He would be the first African-American ringmaster in its history, and the youngest. Johnathan couldn’t refuse the offer and felt his prominent role in the show was an unbelievable dream come true.

Johnathan toured with Ringling Bros.® all around the United States, and his charismatic charm and incredible voice caught the eye of Barbara Walters, who within a year of his first tour named him one of the ten most fascinating people in 1999. Johnathan’s historical tenure with The Greatest Show On Earth is featured in numerous publications, including: the New York Daily News, the Huffington Post,  Black First: 4,000 Ground-Breaking and Pioneering Historical Events by Jessie Carney Smith, African-American First by Joan Potter, Live Life! Be Young, Black, and Successful by Quincy Benton, and Beat of a Different Drum: The Untold Stories of African-Americans Forging Their Own Paths in Work and Life by Dax-Devlon Ross.

Notes from the Show:

He was a nominal fan of the Greatest Show on Earth (Ringling Bros and Barnum and Bailey Circus) as a boy.

His favorite act was Globe of Death/Globe of Steel

He studied to be an opera singer. He planned to move to Europe to launch his opera career.

He auditioned for the Fireside Dinner Theatre in Wisconsin, which was directed by the director of Ringling Bros.

He loved being around the late great Gunther Gebel-Williams.

He credits the Boys Choir of Harlem for his commitment to excellence.

He saw Placido Domingo in Tokyo when he was with the Choir, and at 13 years old, knew he had to become an opera singer.

He credits Dr. Walter J. Turnbull for so much of his success. “You have to walk boys to manhood.”

“Believe me, when you’re 40 feet up in the air, about to turn a triple somersault, you could care less if your catcher is black, white, gay, straight, speaks English, whatever.”

“The Mongolian father has the same concerns for his kids as I do mine. The Chinese guy over there is just as romantic or he’s vying for that woman’s attention like I would have when I was single. We all have these same types of things. It’s really fascinating. I think the arts open the gateway to our common humanity.”

A check for the ego: the animals are the reason people come to the circus.

The circus is a singer’s nightmare.

His first year was vocally traumatic. Working in the circus is a “learn-on-the-job thing.”

Frank Sinatra was so much better after Ava Gardner.

Mortality is what distinguishes his colleagues from him.

The band is the hardest working band in show business.

“You can’t phone it in in the circus. You have to be focused.”

He puts Vaseline on his teeth and a lozenge under his tongue to have moisture in his mouth.

“I continue to be a student of my voice.”

“I’ve never trained with an academic. Ever. I don’t trust someone who’s just learned it from a book. They don’t know anything. People who’ve gone out and done it can teach it.”

“It’s a hard life to be a performer of any kind.”

His wife is his boss.

“I consider myself the wealthiest man in show business.”

Early in his career, it was all about self-promotion. But having wife and kids has changed his perspective. “How do I give?”

“The noblest art is that of making others happy.” – P.T. Barnum

If you’re a performer, be grateful.

“How I Broke Into” is now on iHeartRadio! Also, iTunes, Spotify, TuneIn, and Stitcher. Please subscribe!

Circus or Cirque: The Wonder Thrives on