“The name chose me,” says Cinqué. At Ringling Bros. and Barnum & Bailey, cast and crew alike know him as “Q.” Cool and to the point, he doesn’t suffer fools, but he’s been known to be quite generous when it comes to issuing advice about everything from relationships to work ethic to money — especially money. “I tell these folks around here, save your money!” he barks through his gold-plated grin.

One particular piece of advice he offered me literally revolutionized my cosmetic life. Like many, I struggled with razor bumps. I tried every ointment, method, and concoction known to man, but to no avail. Yet, it was Q’s unsolicited suggestion that changed everything. “After you finish shaving, use Vaseline,” he said. Initially I was taken aback, but I noticed like me, Q, was bald and clean-shaven. Unlike me, he had no signs of those unsightly and irritable razor bumps I’d been contending with for years. I heeded his advice and have enjoyed the benefits ever since.

The circus is known for its rich diversity, men and women of many nations and cultures. However, what has fascinated me these near two decades as Ringmaster of The Greatest Show On Earth are the backstories of the men and women, both cast and crew that populate our “city without a zip code.” The life of individuals outside of the circus rings can be just as mesmerizing as the spectacle that thrills millions annually. Surely some have to wonder what might compel a person to a life on a high wire or a career racing at breakneck speeds atop a motorcycle, accompanied by seven other motorcyclists inside a 16-foot spherical, steel cage. As a valued member of arguably the most efficient crew of working men and women in entertainment, what would bring Q to The Greatest Show On Earth was all at once simple, yet poignant. “Ringling Bros. saved my life,” he says unabashedly. 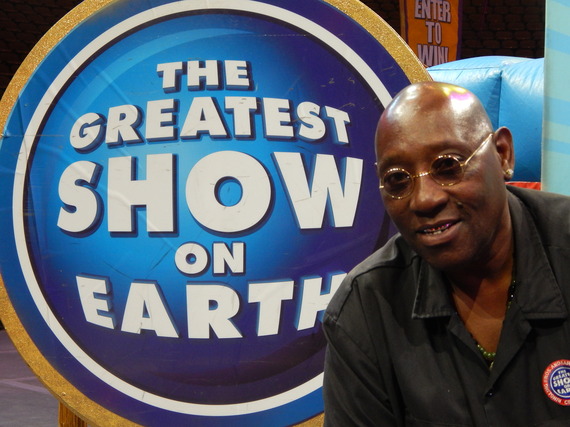 He was born Larry Jackson in Jasper, AL, but he was raised in Birmingham, AL. The name Cinqué was bestowed upon him by some of the respected personalities of his neighborhood he affectionately calls, “the brothers.” “They would say I was a leader and a very persuasive young man,” he says. Such a name bears great significance, particularly among Black people, as it was the name of the leader who initiated the revolt aboard the slave ship known as The Amistad, Joseph Cinqué.

Athletics would soon come to dominate his life. “I could do it all — tennis, basketball, track — it just came naturally to me,” he says. A gifted athlete, Jackson was building a sturdy reputation as a star basketball prospect during his high school years. “Everybody thought I was going to go pro,” he says. “I feel like I would have made millions.” It’s a story that has unfortunately been told and continues to be retold many times over. I have certainly been witness to its retelling far more than I’d like to remember. The story of the extraordinarily gifted athlete, with a future that is as certain as it is bright, only to be snuffed out by one bad choice too many. “A lot of people can’t understand why a kid would gravitate to the streets and not pursue an education,” he says. “It has nothing to do with peer pressure. I was poor. I remember asking my mom what she made per week. When she told me, I was too ashamed to even ask her for anything ever again,” he recalls. “But the streets made sure I could afford whatever I wanted. The streets made sure we could eat. The streets made sure I could wear what I wanted to wear. That was the attraction for me. I could look like the guys I idolized,” he says. Mystified by the desperation of poverty, while seduced by the allure (or rather the illusion) of expedient wealth is a renowned recipe for disaster. The star athlete with such promise would learn a hard and terrible reality — you don’t dally with street life. For the Holy Scripture is true, “the thief cometh not, but for to steal, and to kill, and to destroy.” (St. John 10:10)

“The streets sucked me in and nearly destroyed my life,” says Q. “The places I was going, the road I was traveling, I would either be dead, somebody else would be dead, or I’d be in jail — there’s no retirement plan for that lifestyle.”

Through soul wrenching moments of clarity, Q would eventually reclaim his life, crediting his wife, Barbara, for standing by him through it all. “She’s a strong woman,” he declares proudly.

Gone is the man once easily seduced by self-serving indulgence; his is now a generous and grateful heart. On occasion he is given to brightening the experience of some of our youngest Ringling Bros. and Barnum & Bailey patrons. “I can see me in them,” he says. “My mother wasn’t able to take me to the circus when I was young. I understand those families who just have enough for tickets. When I see that kid with nothing to play with, it breaks my heart, so I get them something.”

During the holiday season he is most fond of interacting with the homeless, specifically at the Garden City Rescue Mission, where he once resided and his picture is now on display. “I go down there to let them know, you can make it out of here,” he says. “If you speak to them and really listen you can connect, and you might just save someone’s life.”

The name a person is given often reflects the hopes of those who bestow it upon the one who has been deemed as such. Cinqué, a.k.a. Q, will not go down in history as a revered revolutionary as did Joseph Cinqué. However, like his namesake, he would overcome his own proverbial captors and break free of a life destined for destruction.

“I’ve been here almost 10 years, clean as a whistle, and I ain’t never looking back,” he says. “My life is on the upswing and I thank Ringling Bros. for that.”