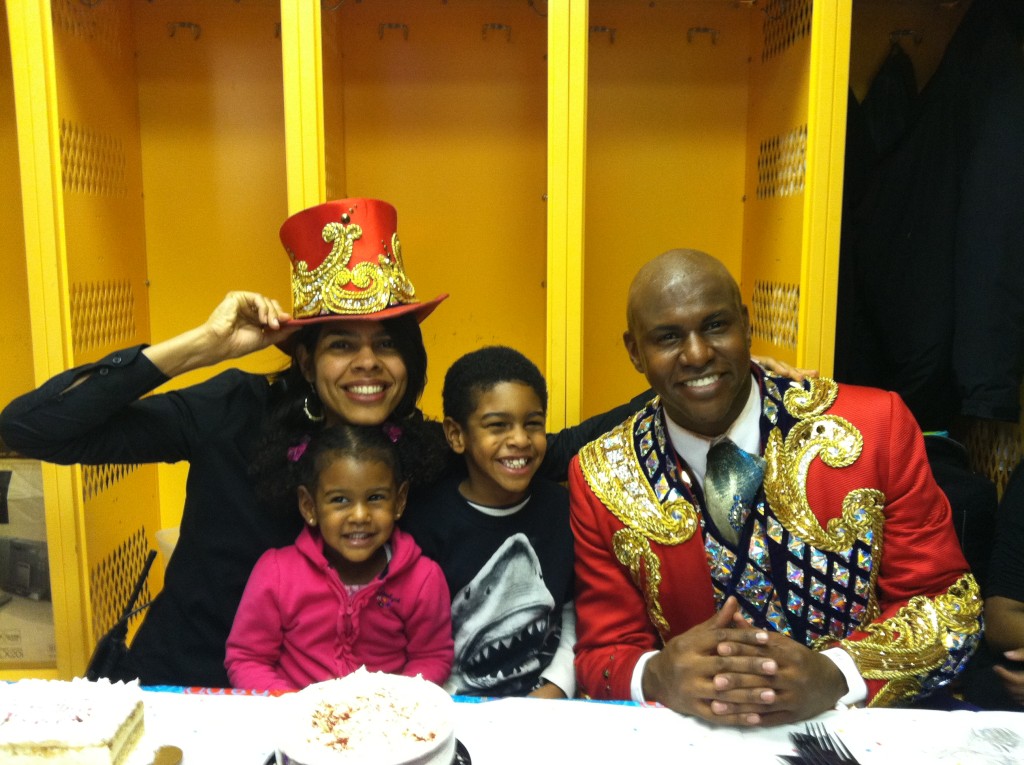 ​For a moment, the spotlight is on him, the lights dancing off his sequined jacket and iconic top hat, as he utters the words the ladies, gentlemen and children of all ages excitedly wait to hear: “Welcome to the Greatest Show on Earth.”

Ringmaster Johnathan Lee Iverson then bursts into song as performers and animals parade into the spotlight. Ringling Bros. and Barnum & Bailey Legends has begun. The all-new Ringling Bros. show opens at the Nutter Center on Thursday, Sept. 24, for seven performances over four days.

While Johnathan is frequently center stage during the show, it is his wife Priscilla who helps make the magic happen behind the scenes as the production manager. Life is a circus — in a good way — for the couple and their two children, Matthew Felipe, 10, and Lila Simone, 6.

“We have challenges, just like any other family, but we have such a great routine,” Priscilla said. “We work for a company run by a family whose focus is families, so it really works. And being with all of the different cultures is such a blessing.”

A native New Yorker, Johnathan began performing with the world-famous Boys Choir of Harlem when he was just 11. The circus wasn’t on his radar as a career until he auditioned for a dinner theater show and caught the attention of the circus director.

“I went to the circus as a kid, but I was there for the cotton candy,” he said. “But, of course, I said yes when I was approached, it sounded pretty interesting.”

And, after 17 years on tour, it continues to live up to expectations.

“I truly believe that the circus is one of the most special, incredible things ever,” he said. “There is such a synergy. The show is really the star. You are just playing your part, but you can never phone it in — none of us can.”

Brazil-born Priscilla got her start in the circus as a dancer before shifting gears to the production side of the show. From the sound and lights to costumes, she makes note of what is and isn’t working.

“She’s the luckiest woman in the world, she gets paid to tell her husband what to do,” Johnathan said with a smile. “She may be my boss at work, but we are partners at home, and that’s a wonderful type of dynamic. And we both do our best to honor our positions and our children through our work.”

The Legends show brings together a wide range of dedicated performers from around the globe.

“A legend is something so magical and larger than life that once you see it, you never forget it,” producer Alana Feld said. “The talent in this show is unprecedented and embodies the name Legends.”

Among the performers are:

• Great Britain’s Alexander Lacey will display his special bond with lions, tigers and a majestic leopard as he presents a mixed cat display that has garnered him numerous awards.

• The Riders of the Wind Cossack equestrians thunder into the arena on the backs of thoroughbred horses.

• The China National Acrobatic Troupe, from Beijing, includes a number of diverse acts including pole climbers, a bicycle act, hoop diving and juggling.

• The Torres Family shatters records and dares the impossible by putting family members on speeding motorcycles inside the Globe of Steel.

And, of course, animals from around the globe — from the Ringling Bros. Asian elephants to lions, goats, llamas, dogs and, even, pigs — will delight audience members of all ages.

When The Bigtop Comes Down | A Conversation with Johnathan Lee Iverson