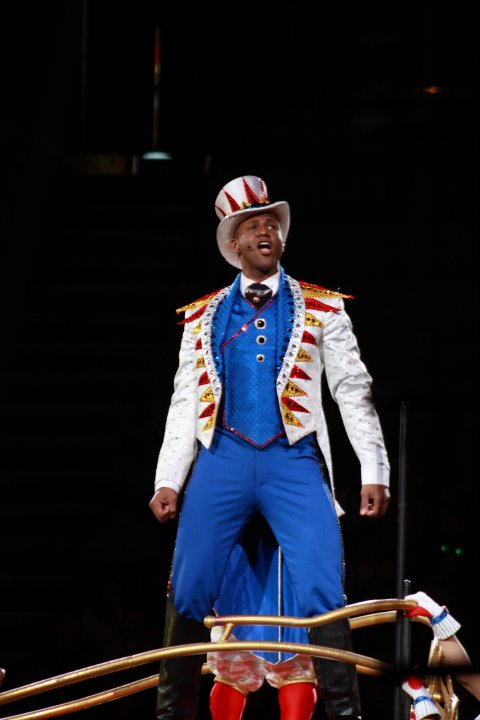 By: Lisa Kinchen and Careshia Moore

Standing at six feet five inches tall with a presence that is larger than life and a voice that matches his stature, Johnathan Lee Iverson is one of the most fascinating people in the entertainment industry. As a Ringmaster for the Greatest Show on Earth, Ringling Brothers and Barnum & Bailey Circus, Iverson has become a legend in his own right. Iverson’s journey to legendary status began in New York City when he was 11-years old and a member of the world-famous Boys Choir of Harlem where he toured with this prestigious choir sharing his gift with the world. During his eight years with the Choir, Iverson learned the foundations of performance and honed his craft that contributes to his fame today.

At the age of 13, Iverson had the pleasure of hearing world renowned-opera singer Placido Domingo sing on the stage. Standing spellbound at his performance, a young Iverson knew that he would spend the rest of his life performing as an opera singer on stages the world over. Despite many attempts by loved ones to pursue what was perceived as more stable or certain career paths, Iverson continued his pursuit.

Following high school, Iverson went on to graduate from University of Hartford Hartt School of Music with a degree in voice performance. While auditioning for a dinner theater and after a series of serendipitous events, Iverson earned the coveted title as Ringmaster with the Greatest Show on Earth. This role would place him in the history books as the first African-American and youngest ringmaster in the 145-year history of the Ringling Brothers and Barnum & Bailey Circus. At the age of 22, Iverson experienced a unique situation that aligned with his dreams and goals of becoming a performer.

As the Ringmaster, Iverson presides over the cast of the circus as they entertain audiences all over the United States. Beginning in 1998, he was the voice of Ringling Brothers and garnered much attention. He was even blessed to capture a spot in Barbara Walters’ Ten Most Fascinating People special in 1999, just one year after touring with the show. After touring with the show and experiencing the time of his life for six consecutive years, Iverson has performed on several other editions of the show.

Iverson’s performance career has included performing in several off-Broadway productions, commercials, special events, voiceovers and even journalism. This multi-talented figure has dazzled audiences in many capacities and enjoys every minute of it. He attributes his success to his strong upbringing and to never giving up on his dreams to become a performer. Despite caring adults in his life who tried to persuade him to pursue a more “stable” career, Iverson continued on with his passion and ultimately his purpose in life.

Undoubtedly, Iverson’s talent has afforded him longevity in his career that is unprecedented. His accomplishments are significant and have placed him in a category of legendary performers. His status was recently recognized as he was asked to continue as Ringmaster for the 144th edition of Ringling, LEGENDS. The show features awesome performers from around the world and introduces the audiences to mythical and legendary creatures of the past: a Unicorn, a Pegasus and a Wooly Mammoth.

Iverson views his job as one who brings mirth, fun and joy to audiences. His love for the circus is apparent, and he touts an amazing work ethic. He values the imagination of the audience and appreciates the space the show creates for spectators to escape from the hustle and bustle of life.

“There are always going to be funny journeys you have to go through. And they are ongoing. When you have a passion you don’t retire. It’s your purpose. You do it until the day you die. If you feel it when you go to sleep and when you wake up, it’s your passion. Go the way your blood beats.”

While traveling, Iverson also has the opportunity to give back and impact the communities that support the Show. Recently, during the Atlanta dates, Iverson took the time to speak to a group of students who participate in Usher’s New Look, Usher Raymond’s youth leadership program. Iverson encouraged the young, talented students to pursue their passions as he did. This walking success story had a huge impact on the youth as he left them with truthful words that resonate with young aspiring leaders. “There are always going to be funny journeys you have to go through. And they are ongoing. When you have a passion you don’t retire. It’s your purpose. You do it until the day you die. If you feel it when you go to sleep and when you wake up, it’s your passion. Go the way your blood beats,” Iverson shared.

With the “sawdust running through his veins” and with enough talent to fill a circus tent, Iverson proudly proclaims his love and appreciation for the “Greatest Show on Earth”. “I will stay around for as long as they will have me.”

So, You Wanna Be A Ringmaster?