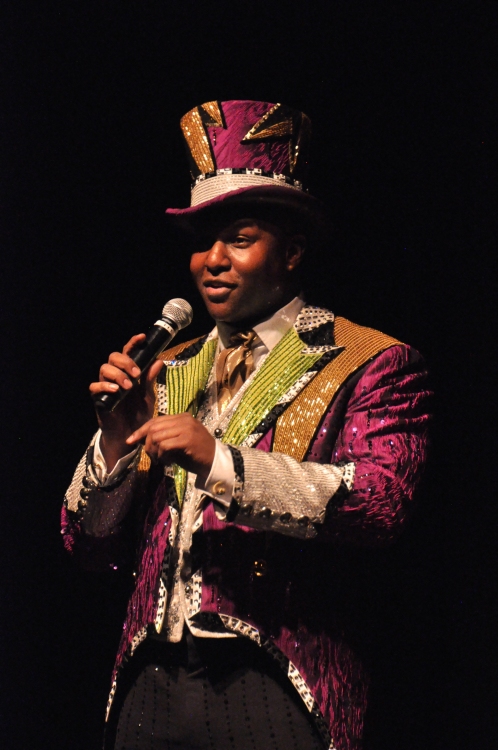 TRENTON — The big voice for the greatest show on earth promises audience members a night they will never forget.

The Ringling Bros. and Barnum & Bailey Circus is coming to town, and according to the Ringmaster, Johnathan Lee Iverson, the eclectic cast of characters create a spectacular event, at every single show.

“Especially when new audience members come to see the show, when it is their first time to see the action — they are captivated, stunned and blown away,” said Iverson.

“We are the greatest artists of any artists — we are the zenith because when things happen or something changes we know how to roll with it and make it an extraordinary event.”

Iverson, a New York City native, is a multi-talented performer and an exceptional vocalist who started his career with Ringling Brothers 15 years ago. He is the first African-American ringmaster for the circus and admits he is very proud to don the iconic top hat and preside over this legendary cast that brings together mythical lore with traditional circus feats.

Constant practice and rehearsal is required to keep all the moving parts of the show moving smoothly. “Each show has to be done just right and it has to be done right the first time,” he said.

“We have to operate in perfection or it can cost you your life or your career.”After three consecutive tours with “The Greatest Show On Earth,” Iverson left to pursue other performance opportunities, but continued to work with Ringling Bros. for special events. Iverson performed in several off-Broadway productions including “Carnival,” “Showboat,” “The Magic Flute,” and “Dreamgirls.” He also has acted in commercials and done voice-overs for the animated feature “Eloise,” in addition to a bit of freelance journalism.

“The circus is like the mafia, you can never really leave,” he said. And so he rejoined the team as the big top leader during the show’s 140th year.

Although he says his co-workers are not the typical circus “freaks” normally showcased in the media, he does believe that every performer must have a unique personality to be a part of “The Greatest Show On Earth.”

“We’re a community and as in any community, you have all sorts of people,” said Iverson. “It is our cultural differences that causes us to transcend and share those differences within show.”

Joining Iverson on the rails is his wife and fellow performer Priscilla, whom he met and married while previously touring with Ringling Bros., and their children Matthew Felipe and Lila Simone.

Continuing the 144 year tradition of riding the rails, the circus rolls into Trenton on May 14 and will perform nine shows through May 18, before packing up and moving on. The traveling show, which tours for 11 months out of the year, is a close knit “out-of-the-box” family , according to Iverson.

“It’s like the Justice League and X-men had kids.”

After being laid off from American Express, Sherrina Navani went back to school and got a masters from C.U.N.Y. She isn’t scared to ask tough questions and enjoys getting the story behind the story. Reach the author atSnavani@trentonian.com .
: Artists, Circus, Johnathan Lee Iverson, Justice League, Ringling Bros. and Barnum & Bailey, Ringmaster, The Greatest Show On Earth, X-Men

All About That Bass

Johnathan Lee Iverson Sings Opera In A Speedo For JEEP