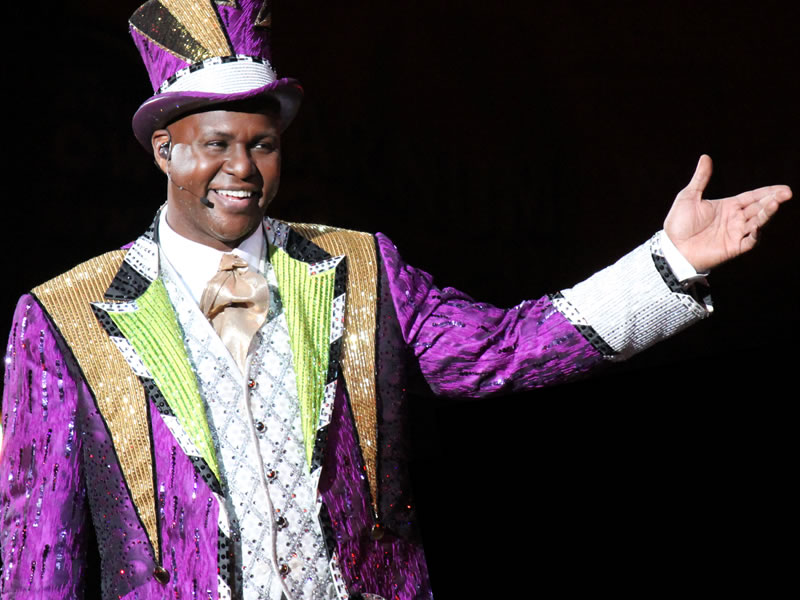 “Legends” is the name of the 144th edition of the Ringling Bros. and Barnum & Bailey Circus, and it is coming to the Barclays Center on Feb. 20. The circus stars Harlem-raised African-American Johnathan Lee Iverson as its ringmaster and has had him in this role for over a decade. Although the show is currently on tour in other cities, Iverson took the time to do an interview with the AmNews. The Q&A follows.

Amsterdam News: Mr. Iverson, how does it feel to know that you were the youngest ringmaster and the first Black ringmaster in the history of Ringling Bros. and Barnum & Bailey?

Johnathan Lee Iverson: Recently during our engagement in Birmingham, Ala., two grandmothers approached me with grins as wide as the state: “We couldn’t even go to a circus when we were young … seeing you out there just gives me goosebumps.”

I didn’t have to march countless and treacherous miles to gain rights already guaranteed me as a citizen of the United States. I didn’t have to bear the brunt of brutality, indignities and government–endorsed policies designed to oppress me. As James Baldwin would say, “[My] crown has already been bought and paid for. All [I] have to do is wear it.” Well, I wear a top hat, and every time I put it on, I thank my Heavenly Father and my glorious ancestors, and then I get to work.

AmNews: What part of New York are you from?

J.L.I.: I am a native of the Upper West Side by Central Park West, but I was raised in Harlem.

AmNews:When you were a child growing up, what was it about the circus that you enjoyed the most?

J.L.I.: The circus, particularly Ringling Bros. and Barnum & Bailey, which was the circus (still is), was otherworldly to me. It was like entering “a living dream,” as Ernest Hemingway once quipped. I loved everything, from the scent of cotton candy to the famous menagerie, to my all –time favorite act, the “Globe of Steel.”

AmNews:When you are performing your duties as a ringmaster, how does it make you feel?

J.L.I.: Responsible! Tens of thousands of strangers have entrusted us with their time, money and imaginations.

AmNews:What are the challenges that you face as a ringmaster?

J.L.I.: Endurance! I perform well over 400 live shows annually, which require me to sing and announce in addition to promoting the show via the press and speaking at schools. The ringmaster is not only a performer—he’s an ambassador.

AmNews:How many years have you been a ringmaster with Ringling Bros.?

AmNews:How do you feel about traveling the country, touring with your wife, who is employed by the circus, and your young children?

J.L.I.: I couldn’t ask for anything better. We live, work and play together. The “Greatest Show on Earth” provides both a nursery and school, and as parents, we use our travels as a means of educating our children as well.

AmNews:What do your children think of what daddy does for a living?

J.L.I.: They both love the sight of me in costume, especially my daughter. She loves to sing my songs, and she sings them rather well.

AmNews:The 144th edition is called “Legends.” What are some of the acts that audiences should expect to see?

J.L.I.: As always, the “Greatest Show on Earth.” With this show, we pay homage to the mythical, magical and even prehistoric. Included in our world-famous menagerie of majestic elephants, vigorous lions and tigers, rescue dogs, gallant steeds, perky pigs, fabulous kangaroos and a whole host of exotics, is a pegasus, unicorn and a woolly mammoth. The two-legged mammals are pretty cool as well. You’re going to be blown away by the “King of the Big Cats,” Alexander Lacey; everyone’s favorite little big man, Paulo; the “First Family of Daring,” the Torres and their “Globe of Steel”; the record-setting feats of the China National Acrobatic Troupe; and the brilliance of the Solar Hawks, with original music performed by myself and the legendary Ringling Bros. and Barnum & Bailey Band.

AmNews:When is the show going to play the Barclays Center?

J.L.I.: We open at the Barclays Center Feb. 20 until March 2. I cannot wait! It will be my first visit to the new Brooklyn facility, and they are in for a legendary treat!

AmNews:You had previous experience performing in front of a crowd, being part of the Boys Choir of Harlem, performing on a Broadway stage and in Central Park. How do the feelings you had when you were younger and at those specific moments in your life compare with how you feel when you are out in your costume and announcing from the ring?

J.L.I.: I think of where I would be now had my mother allowed me to quit the Boys Choir of Harlem. Actually, I shudder to think about it. I am so grateful for those long, arduous rehearsals after school. All of those rehearsals, all of those lessons, all of those many miles traveled make up the confidence I feel every time I step on to the arena floor before thousands to present the “Greatest Show on Earth.”