“Who are the great performers that people love the best? Who are the entertainers that leave you most impressed? Who makes the circus grander the moment they appear?”
Whether you’re a newcomer to The Greatest Show On Earth or a card-carrying member of the Circus Fans Association of America, you know the answer. Their very presence can eclipse the most spectacular of human efforts. They are of course the members of the world’s most famous menagerie, those fabulous animals of Ringling Bros. and Barnum & Bailey. It happens time and again. Daring men and women with the skill to spin audiences into a tizzy are brought low by the majesty of a lion, the high hopping feats of a kangaroo, or the adorable factor of a pony. Yet, we all bend a figurative knee, two-legged mammals and all, to the Biggest Stars On Earth, those World Famous Ringling Bros. and Barnum & Bailey Elephants.

I learned two things upon joining The Greatest Show On Earth over 15 years ago. 1) No matter how spectacularly talented you think you might be, every human being whose ever been privileged to be cast in the longest-running hit show in the world understands, without question, that top billing belongs to the four-legged mammals and 2) circus at its purest is a celebration of living things at their utmost. This is why that sacred relationship between human and animal continues to captivate audiences across the United States. No matter how some might dare to distort that relationship through emotionally hyped campaigns, the tens of millions who continue to congregate at Ringling Bros. after nearly 145 years, filling arenas across the United States witness the “professional and extremely humane conditions” of the world’s most renowned menagerie. Audiences learn about these “extremely humane conditions” via our Animal Open House, 90 minutes prior to every show in most cities, as well as, our all-access pre-show 60 minutes before the show begins. Some will enjoy our Animal Scout Clinic which features star trainers demonstrating their report with our star attractions. You’ve seen and will see the effortless and affectionate companionship between the brilliant Alexander Lacey and his regal big cats. You’ll see it in the feisty humor of the finely-groomed rescued canines of Hans Klose and his performing pigs as they prance down a red carpet. You’ll know it in the powerful steads of Kanat Tchalabaev and his mighty Cossack riders as they charge gloriously about center ring, it’s obvious in the buoyant charm of llamas, goats and miniature donkeys guided by the skilled hands of Viktoria Zsilak and Alex Petrov, you’ll most certainly see it in the appearance of the grandest stars of all, those Ringling Bros. and Barnum & Bailey elephants. In fact, when you purchase a ticket to The Greatest Show On Earth, you’ll join us in assuring that generations hereafter will enjoy the majesty of these brilliant creatures, as portions of the tens of millions of tickets sold will support the Ringling Bros. Center for Elephant Conservation, the undisputed leader in the preservation and the reproduction of the endangered Asian elephant. 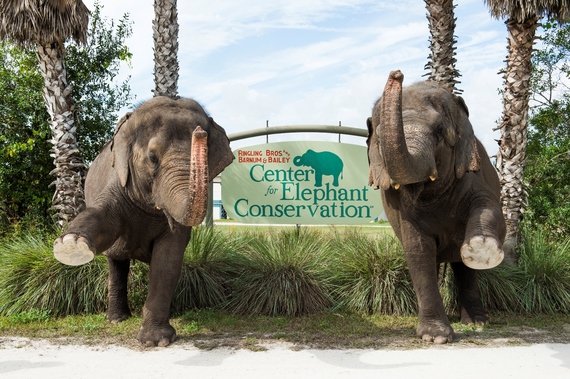 Like so many I’d heard the infamous heresy regarding the life of animals under the big top and made it clear when I met with the late-great Tim Holst, Ringling Bros. beloved talent scout, some years ago, that no matter how exciting the opportunity, I would not be apart of it if such things were true. It was at the Center for Elephant Conservation that any reservations I had about taking the reigns of Ringmaster were settled. People tend to mythologize and romanticize that which they are ignorant of and thus, often fall prey to individuals and institutions, that purport themselves to know better, for a monthly tax deductible donation of course, but in fact are no wiser than you. Having traveled and performed alongside our animal stars for nearly 16 years it hasn’t been their industry leading facilities or their health care that rivals Heads of State that most fascinates me. It’s those unique personalities that aren’t so different than ours. I’ve met elephants that are social butterflies and affection junkies, while others clearly could care less and you would do well to respect that. I’ve been amused by lions who are the very picture of laziness and tigers who will do anything for the slightest praise. I’ve enjoyed canines whose humor could rival any clown and others who are cunningly mischievous. Whatever they might be I have found they all share a remarkable commonality, their intimacy with and their reverence for their trainers. An intimacy and companionship that is not by chance nor is it a one sided affair. When you’ve witnessed a herd of pachyderms erupt in pure joy at the sight of a familiar face they haven’t seen in almost a decade, as was the case when the legendary Mark Oliver Gebel paid them a visit this recent Winter Quarters or grown men and women overwhelmed with grief over the slightest misfortune that might befall their four legged companions, then can you truly appreciate the depths of that bond.

Typical of our elite animal trainers the journey from animal enthusiast to expert animal trainer is a patient and persistent pursuit that begins very early. As a young lad in England, Alexander Lacey’s closest companions were of the exotic variety. “My parents owned a couple of zoos, so as early as 4 years old my play mates were basically lion cubs, tiger cubs and bear cubs.” Yet, having cubs as buddies and parents in the business of animal care did not at all entitle Lacey to a career with animals. “My parents were very good at making me realize that the most important thing about working with animals was learning how to care for them properly. I had to pick up the poop and do the not so glamorous odd jobs for five years before they would even teach me anything.” It is the “not so glamorous” chores that plant the seeds of trust that will eventually bloom into a relationship between trainer and animal.

“Patience, persistence, and praise,” bellows Ringmaster and third generation cowboy, Andre McClain. Sounds like a marriage, doesn’t it? In a lot of ways it is. “This is not a job, it’s a covenant. It’s hard to explain to people who don’t live our lifestyle, who don’t live circus. The people who care for these animals live with them. They don’t check out at 5pm and check back in at 8am,” says Janice Aria of the Ringling Bros. Center for Elephant Conservation. “I don’t take vacations. Animals are a twenty four hour, seven day a week occupation,” reiterates Hans Klose.

This “covenant” is evident in the exceptional care these animals receive. “Looking out at these elephants I can’t help but think, ‘man, I wish I had their health plan.’ I’d be satisfied with their pedicurist,” chuckles Janice Aria. The cost for the care of the average Ringling Bros. and Barnum & Bailey elephant is an estimated $65,000 a year, which far exceeds the median income of your average American household. “I hate to say this, but these animals have better care and health care than most children,” states Dr. Danielle Graham. A team of elite veterinarians, which includes the likes of Dr. Dennis Schmitt and Dr. William Lindsay, frequent the show for weeks at a time. Dr. Schmitt, Chair of Veterinarian Care and Director of Research at Ringling Bros. Center for Elephant Conservation, as well as, Professor Emeritus at Missouri State University, is best known for overseeing the first elephant born via artificial insemination. Dr. Lindsay is Veterinarian Consultant at Ringling Bros. Center for Elephant Conservation, with well over 30 years experience, he is revered as one of the foremost large animal surgeons on the planet. This is analogous to we two-legged mammals having Dr. Mehmet Oz and Dr. Ben Carson as Primary Care Physicians.

Easily the envy of their industry, Ringling Bros. and Barnum & Bailey veterinarians are expert at working with an exotic array of animals from porcupines to lions to elephants to llamas almost on a daily basis. “I don’t have a budget when it comes to the health of these animals. Whatever an animal needs, that animal gets,” says Dr. Danielle Graham. The health and vitality of these animals is why the Ringling Bros. Center for Elephant Conservation is renowned for its groundbreaking work. “It’s a mecca for top animal scientists who specialize in the care and reproduction of elephants,” says Janice Aria. Heralded for its reproduction program, having birthed over 25 calves since being established in 1995, the Center is also on the forefront of combating illnesses, which threaten the population of the endangered Asian elephant, such as Tuberculosis and the dreaded Elephant Herpes Virus. These are remarkable efforts to say the least, proving The Greatest Show On Earth to be far more than entertainment, but an animal’s greatest friend.