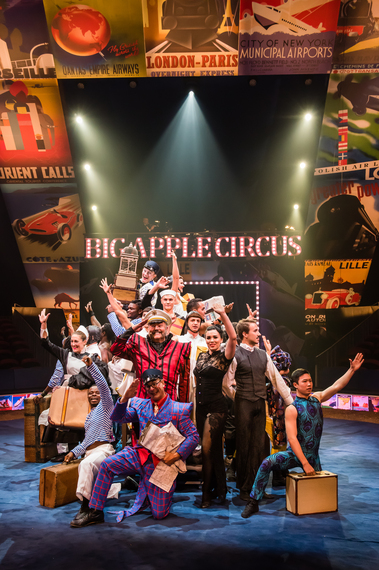 On occasion it is implied that the circus is an archive of a bygone era. Cynics blather exhaustively that the art known for soaring bodies and fabulous animals, among other diverse spectacles, has somehow faded by the wayside of a modern tech-indulgent generation, whose own spectacles, we are told, are so effortlessly accessed via their phones.

On a recent outing to see colleagues of my sawdust community, it was vividly clear that this was not the case for the many spectators who made their way under the enchanting big top tent of Big Apple Circus for their latest edition, The Grand Tour. Set in the roaring 1920’s (speaking of bygone eras), audiences are whisked away by the comedic talents of Joel Jeske, writer and creator of The Grand Tour and Brent McBeth. Along with a cast that includes the ever-delightful Jenny Vidbel and Emily McGuire, the show-stopping hand-balancing of the Energy Trio and the hair-raising exploits of the Dominquez Bros. and their Wheel of Wonder, Ringmaster John Kennedy Kane beckons one and all to a figurative adventure that takes audiences around the world by ship, train, plane and automobile — thus The Grand Tour. Big Apple Circus delivers a bevy of enticements for young and old alike. There’s enough charm, thrills, laughter and swinging tunes, played skillfully by Big Apple Band, to excite every imagination. You’ll feel like a VIP the moment you set foot under the big top, be it because of the humorous banter of Jeske and McBeth or the pony rides that are offered during intermission and after the show.

Playing a few subway stops from Big Apple Circus at Lincoln Center is Cirque Mechanics, a hip and daring testament to the evolutionary soul that is the Circus. Cirque Mechanics is the brainchild of Massachusetts native Chris Lashua, who began his career with the famed Cirque Du Soleil. Previous productions of the innovative Cirque Mechanics are Boom Town (2011) and Birdhouse Factory (2008). The uber-talented cast of its latest edition Pedal Punk take to bikes, unicycles, a trampoline, a rola bola, hula hoops and Chinese yo-yos and spin a tale of a bike shop, its mechanic and the patrons that frequent it. There’s no big top tent, but instead there’s a stage. The New Victory Theater, now in its 20th year, is no stranger to circus, as it plays host to Bello Mania starring the amazing Bello Nock, formerly of Big Apple Circus and Ringling Bros. and Barnum & Bailey®.

In true cirque fashion Pedal Punk is a character-driven spectacle. The story is the star. Humor, danger, curiosity and even love are on full display — wholly grounded by the ingenious interaction between human beings and mechanical apparatus. 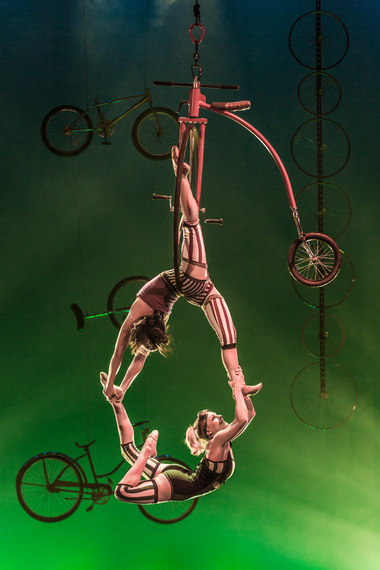 Circus (or cirque) thrives on living art for audiences of every age and conceivable walk of life, be it under the big top, the theatrical stage or the many sumptuous arenas that host The Greatest Show On Earth® and contrary to the musings of the cynics, this legendary marvel is far from extinction. For circus (or cirque) can carry us into the nostalgia of ages past or the innovations of the present day. The Grand Tour and Pedal Punk may be very different renditions of this old, yet remarkable, art form, but the aim is still the same — make the impossible accessible and wonder tangible.

Come one, come all to a circus (or cirque) near you!