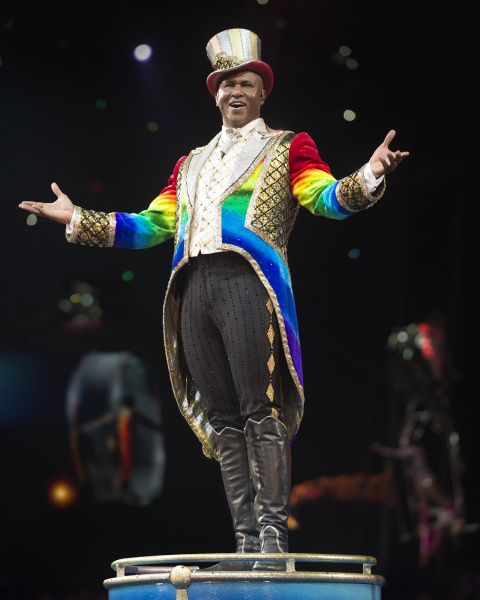 Big Time Under The Big Top

Johnathan Lee Iverson didn’t intend to run away with the circus, but when the opportunity came calling, the classically trained vocalist couldn’t say no.

Sixteen years later, the Ringling Bros. and Barnum & Bailey ringmaster said he has enjoyed every day of his career.

“There’s never a dull day at the ‘Greatest Show on Earth,'” Iverson said during a phone interview. “When your backyard is Hershey Park one day and Disney the next, (you’re always) making memories. I go to the circus every day. I don’t know how you can have a bad day working for the circus.”

This weekend, Iverson and his circus troupe will be in Bakersfield for seven shows of the Ringling Bros. and Barnum & Bailey Presents Legends.

The pegasus, unicorn and wooly mammoth that will be on stage aren’t the only “legendary” aspects of the spectacle.

“The show itself is legendary. It’s the longest-running circus (and) an American icon,” Iverson said. “It’s the genesis of American pop culture.”

Iverson said he acts as an interpreter between the stage and the audience, explaining the fantastic feats. There’s the China National Acrobatic Troupe, the Globe of Steel motorcyclists, and, of course, the menagerie — horses, dogs, lions, tigers and elephants.

“I’m in a top hat and tails, but I’m a glorified fan,” Iverson said. “I’m as amused and fascinated as (the audience is).”

Since he travels 11 months out of the year, Iverson is happy his family is on the road with him. His wife, Priscilla, is a production manager with the show, and the couple have two children. Iverson called the opportunity to travel with his family “an enchanting type of existence.”

An hour and a half before the show, guests will have the opportunity to see the four-legged performers up-close at the Animal Open House.

“Everyone always asks about the animals,” he said, noting that the open house is the best way to learn all about them.

At the All Access Pre-Show, guests can meet the circus’ human performers and even learn a few tricks themselves, right on the arena floor where the show will begin shortly after.

Whether at the pre-show or the main event itself, Iverson’s favorite part about being a ringmaster is seeing the audience’s reactions to the performance.

“I enjoy seeing the audience become enraptured, that feeling of abandonment.”

Throughout the show, Iverson is decked out in a variety of sequined costumes. He recalled an usher who once told him the show reminded him of a Cher concert, with all the wardrobe changes. For Iverson and many a circus attendee alike, it’s part of the fun.

“With phones and iPads, we’re so distracted and creating an alternate universe where we live on the phone,” he said. “We miss the joy and the gift that live entertainment gives us.”

A circus attendee once told Iverson that the show was so awe-inspiring that it “brought him back to life,” he said.

“There are so many unhappy things occurring. It’s never lost on me that every time we step out on the arena floor, we’re affecting someone’s life, in ways we can’t imagine.”