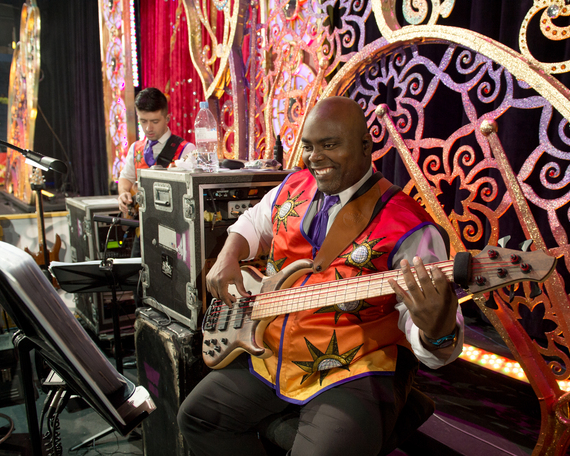 “The bass is the base…” He chuckles. He is Michael Brown, bassist for arguably the hardest working band in show business, the Ringling Bros. and Barnum & Bailey® Band, specifically, the band for Ringling Bros. ® Presents LEGENDS. It is the Blue Unit of the storied franchise that inhabits three touring shows, each with its own live band.

“What I play and how I play it determines how you will hear the music and how you will feel the music,” says Brown. It is a sentiment I can attest to as the voice of The Greatest Show On Earth®. Countless times while belting out those original circus hits, accompanied by the Ringling Bros. Band, my body will take to an unconscious sway, with hands clapping and toes tapping, and my voice will instinctively riff as if possessed.

For nearly a decade, Michael Brown’s bass has been “the base” for the melodic sounds of The Greatest Show On Earth, establishing his ever-evolving brand of musicality. To know him is to immediately recognize that he is both a fan and student of the instrument. Names like Victor Wooden, Louis Johnson, Jaco Pastorious, Stanley Clarke, Larry Graham, James Jamerson and Bernard Edwards are among Brown’s musical heroes. Therefore, they are the standard for which he aspires.

“I have started to incorporate active rest during intermissions. I work on something like dexterity or playing a bass line that I am learning. I frequently go back and relearn bass lines that I have not played in a while for their groove factor,” says Brown. “Right now my approach can be called work-study. I practice at home, which is the famed Ringling Bros. Circus train, and in between shows like I’m studying before my next class. I am never bored musically because there is always something to do or learn.”

To some, this kind of devotion to craft may seem remarkable when one considers the demands of his job as well as the stability it affords he and his bandmates. That stability is something many musicians can only hope for. This is a fact that is never lost on Brown or his fellow musicians. With such stability and the demands of the job at hand, the temptation to merely coast by might very well arise. However, Michael Brown is as committed to his music as he is humbled by the opportunity he has been given to share it. The journey he took to arrive at this coveted place in his career is never far from his mind.

Music entered the Chicago native’s life in the same way it does with many people. It arrived through radio, television, family gatherings, etc. However, for some, music beckons as more than a passing interest.

“I was at a relative’s house who had a bass player staying there as a guest. I picked up the bass put it on my knee and against my chest and plucked the E string. The vibration went though my whole body and I was hooked! I was now going to be a bass player!” says Brown.

During his high school years, music was very kind and acted as a savior for Brown. It granted him a vehicle to focus his adolescent energies and redirect his angst brought on by issues at home. However, like so many once aspiring musicians (or artists for that matter) he would eventually betray that first love, music — sort of.

“I went to Vandercook College of Music to become a music teacher but that was not where my heart was; I wanted to play music,” says Brown. For the next several years of his life, Brown would reap the wages of his lackluster commitment to music in the form of odd jobs ranging from a bouncer to a certified personal trainer to a DJ at a roller skating rink to a newspaper deliveryman to a bank messenger. He actually worked his way up to a comfortable management position in banking before eventually being laid off.

Brown’s life, at this juncture, was the prophetic embodiment of what the great P.T. Barnum once mused, “Unless a man enters upon the vocation intended for him by nature, and best suited to his peculiar genius, he cannot succeed.” For Brown it became abundantly clear that there are no successful part-time musicians, just as there are no successful part-time physicians or athletes, etc. That which is “intended for [us] by nature” will not reward our partial efforts. Fortunately, for Brown — and probably a great many others — one’s calling can be quite forgiving. He would eventually find his way back to “the vocation intended for him by nature,” this time with a full-time effort, upon the high seas, no less, aboard a number of cruise ships. There, he would recommit himself, expand his knowledge and advance the skills needed for his craft. It was during a stop in Alaska that he received a call from renowned bassist and instructor Anthony Wellington about an opening for a circus gig that would pave the way to a career with The Greatest Show On Earth. 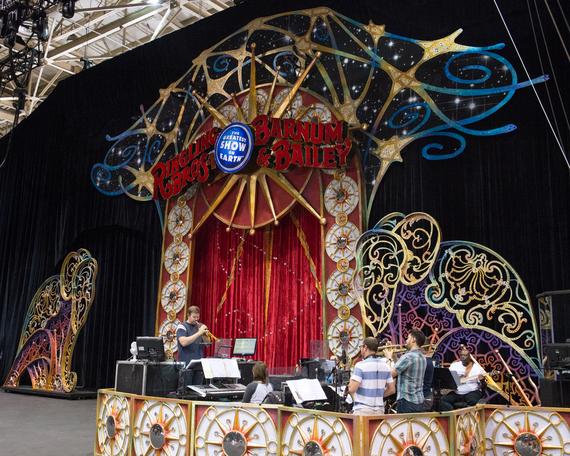 Intermission is coming to a close in just a few minutes when I hear the alarm to Brown’s watch begin to sound. Suddenly, our conversation is cut short. “Sorry, but I’ve got to go,” he says as he hurries back to his post at the bandstand to prepare for the second half of the show.

I’ve known of few artists, if any, who are as cognizant of their role within a collective as is Michael Brown. “For years now I have been trusted to play the music the way I think it should be played. That has meant me playing fretless bass, using effects, switching basses during a show — whatever I think will make the music better for the show. I believe that is where the trust lies. I have demonstrated that I have the show and the audience in mind when I play, not just showboating,” he says.

From the trapeze artist throwing the triple somersault to the Cossack riders sprinting to leap upon the back of their steed to a two-stepping performing pachyderm to the scintillating sway of a dancer’s hips, it is all about that bass and the music it anchors that heightens each thrill and accentuates the experience that is Ringling Bros. and Barnum & Bailey.

For Brown, his glory is in the shadows. Ever present yet hardly noticed at all, and he would have it no other way. For Brown it means he is fulfilling his role within the collective. “If I’m doing my job correctly you are very seldom aware of me,” he says.

That’s unless one might catch him dancing while strumming his bass, during one of the show’s more festive numbers. “When you see someone dancing it is hard not to have a good time,” he says. Indeed, it’s that “good time” he has committed himself to sharing with Children Of All Ages, from city to city, coast to coast. It’s the kind of “good time” for which only the joy of living the life of your dreams can produce.