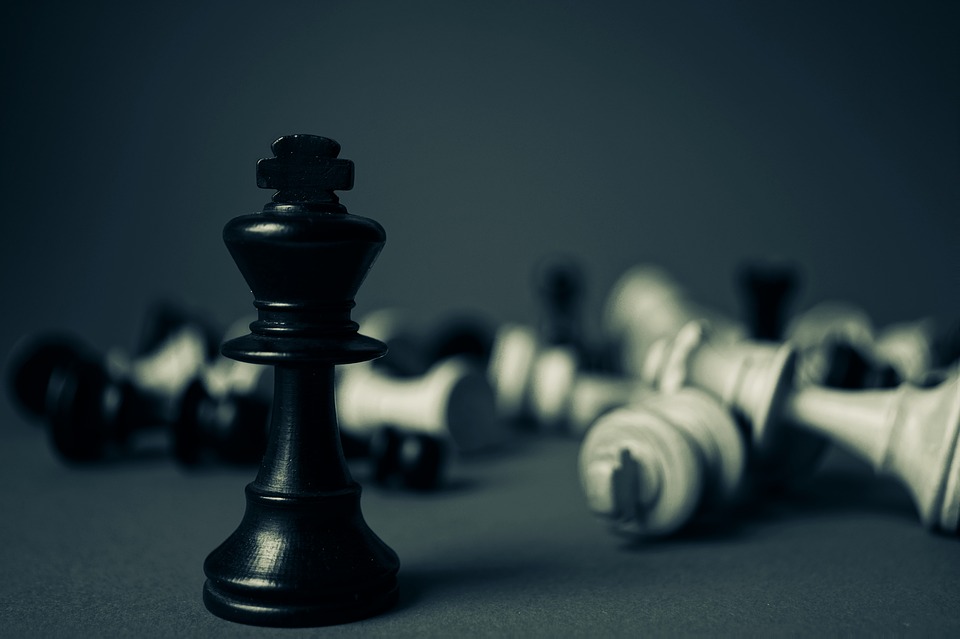 5 Things To Consider When Picking Your Battles

Don’t go wrong trying to be right I’ve heard it said. The need for justice is universal. When you feel slighted, let down, harmed, etc., it can be off putting, but when there appears to be no justice to balance it can be devastating. Recently, Academy Award winning actress and comic legend Mo’nique appeared on The Steve Harvey Show with Steve Harvey. It was a lively affair to say the least. It was the kind of candid exchange most are not accustomed to viewing on daytime television. However, it was not the contentious, Jerry Springer like encounter much of the press would lead us to believe. It was candid, for sure, but it was the kind of conversation that two people who clearly love and respect one another can have. It was unmasked and familiar.

The premise of their conversation centered around, the comic star’s highly publicized belief that she is being Black balled by substantial figures within the Hollywood establishment. She has been unapologetic about her dismay with Oprah Winfrey, Tyler Perry, Lee Daniels, and Lions Gate Films, all of whom were behind the motion Picture Precious, for which Mo’nique won the Oscar for Best Supporting Actress. Also, Mo’nique called for a boycott of the popular streaming service Netflix due to what she perceived as a racist and sexist bias by the company, as she and her supporters believe, that for an artist of her stature, she was offered a rather meager form of compensation for a comedy special.

It is no secret that the business of entertainment is as glamorous, as it is taxing, especially for those who are in pursuit of the limelight. As a participant I can say without a shadow of a doubt it takes a tremendous amount of grit to aspire in such a world. It is the only business I know of where in a tragically true sense, ones talent and accomplishments are, in many instances, an after thought and whether one wins the role or doesn’t is more often than not, a decision made by individuals who can hardly boast of sharing your depth of talent. It’s a strange kind of world, especially now, where anything from your look to how influential you are on social media can determine whether you win the part or not. Few ever reach and sustain themselves in that upper echelon of performers that become familiar faces and household names. For the overwhelming majority of those who venture in, “no” is the most frequently heard word in your pursuit of that big break. Add to this challenge the matter of race, sex, and age; and you have yet, another few hurdles to contend with. The stories of inequities within the industry for women, people of color, and more specifically, Black people are endless. Even when highly accomplished there seems to always be yet another door to push through. Not too long ago it was reported that actress Jessica Chastain, star of such films as The Help, Interstellar, and Molly’s Game stepped in to aid her Help co star and Academy Award winner, Octavia Spencer earn 5X’s her asking price for a project the two would appear on, after revealing to Chastain that as a woman of color she is simply paid less. This was a grievance echoed by the renowned Viola Davis, also an Academy Award winner, who famously exclaimed: “If I’m the Black Meryl Streep, then pay me what I’m worth!”

To think that these critically acclaimed and award winning artists are still contending with such matters, despite their many achievements is appalling and likely gives credence to that which Mo’nique is, herself contending with.

When you’ve done the work, played by the rules, and over performed, yet, still do not receive your just due, it can be disturbingly disheartening. This has been the legacy for far too many women, people of color, and Black people in this wonderful and sometimes terrible business of entertainment.

As I am not in the mind of Steve Harvey or Mo’nique I can only convey what I perceived them to have meant during their exchange. Attached herein is the segment in its entirety. You may judge for yourself:

As is the natural order of the age, social media was ablaze, specifically regarding Steve Harvey. The memes have been ever flowing as have the commentary. I highly doubt Harvey has lost any sleep, as this is not his first rodeo on the proverbial chopping block of the worldwide web. He survived his Miss Universe gaffe and he’ll most certainly come through this as well.

Personally, what I gathered from what Steve Harvey was attempting to convey to Mo’nique was the age-old adage – choose your battles. Again, this is merely my opinion. No matter how justified one might feel there is an art to war. No matter how morally right one may be, when contending with the powerful one must accept the stark reality that power only respects power. Frederick Douglass surmised this truth perfectly: “Power concedes nothing without a demand. It never has and it never will.” Simply put, when you go against powerful forces, be realistic and be equipped. Moral victories are merely symbolic and carry nothing tangible, no matter how right you may be. The entire point of venturing into conflict is to attain something of value – liberty, justice, equity, treasure, etc. Anything less is just a bloody mess, literally and figuratively. In that spirit here are 5 things to consider when picking your battles:

“It is a matter of life and death, a road either to safety or to ruin. Hence it is a subject of inquiry which can on no account be neglected.” – Sun Tzu, The Art Of War

Battles of any kind will require of you. Depending on those you are contending with, it will be toilsome and costly. You have to understand and determine from the outset what it is you are willing to risk. One must also consider the aftermath even in victory, especially when one contends with the powerful. Is the toil and lose worth the gain? What will it mean for your reputation? Casualties will accrue, even for the victor(s), as this is the nature of war. How much are you willing to lose? In Mo’nique’s situation the risk are clear. She stands a chance of being ostracized by the industry she currently makes her living in. According to her, she’s already been black balled and deemed “difficult,” which is often a virtual career death sentence, especially for women in the entertainment business. She may never work again or at least not enjoy the level of stature she once had.

“For by wise counsel thou shalt make thy war: and in a multitude of counselors there is safety.” – Proverbs 24:6 KJV

No matter how righteous your cause may be to you. You are not the best judge regarding the matter. Not only are the stakes too high, the matter is far too personal for you to rely solely on your own instincts, no matter how even tempered you might perceive yourself to be. You will need others to view your situation with a fresh and unbiased perspective. Receiving the counsel of others, particularly those unattached to the situation affords you clarity and insight which is not always possible for you to see being so intimate with the situation. Good counsel may very well save you from yourself and a ruinous predicament. If it is decided that you will proceed, good counsel will be imperative for your strategic planning.

“He that is proud eats up himself: pride is his own glass, his own trumpet, his own chronicle.” – William Shakespeare

It is critical that you know what drives you if you wish to proceed into battle. Pride is a tricky thing. To the one who believes their cause to be just, pride can be a most alluring seductress posing as courage only to devolve into a calamitous kind of stubbornness, which leaves one ignorant and blind to ones own destruction. Can you keep your eyes on the cause and not your need to win? To exchange the cause for pride in the midst of battle is its own self-consuming disaster, which might very well result in far more casualties than necessary. Pride is a figuratively blinding and deafening force, which poisons with heightened delusions. The cause is no longer the cause when the cause becomes about you and to be right at any cost, even at your own peril. Let your cause be the only motivation and purpose.

“The two most powerful warriors are patience and time.” – Leo Tolstoy

Haste and impatience has been the ruin of many and shall be the ruin of many more. “To every thing there is a season, and a time to every purpose under the heaven” (Ecclesiastes 3:1 KJV). Pride is most often the culprit, which is why one must be exact in their motivations. Pride is the impetus for impatience and careless haste. Time and seasons must be rendered the highest respect, as they most often are the deciding factor between victory and defeat. Not even talent has as much bearing as does time. In boxing it is often said, precision beats power and timing beats speed. It is tragically possible to go wrong doing right and this has everything to do with time. How often have you heard it said: “they were ahead of their time or it’s too much too soon?” No matter the effort or how righteous the cause, even victory has its own season. The decision to proceed into battle must be a patient choice.

“In all matters, before beginning, a diligent preparation should be made.”

Consider your opposition and prepare accordingly. Preparation requires a thorough self-assessment. What strategies and strengths do you already have that will be of use? Where are you most vulnerable? Are you equipped to take advantage of your enemy’s vulnerabilities? Are you in a position to not only venture into battle, but sustain yourself during the conflict? Who are your allies and how affective are they? Over and over again in the interview with Steve Harvey, Mo’nique strongly suggest how abandoned she feels by supposed friends in the industry. Is this a result of her hastiness? Not receiving good counsel? Not accessing her friends, but rather assuming what their stance would be? Is it their cowardice or lack of interest in her conflict? In the same interview, Steve Harvey eluded to how no one was able to grasp the substance of Mo’nique’s call to boycott Netflix. This is evidenced by the fact that the response to her call to boycott Netflix was met with far more memes and criticism, than empathy. If you desire to win the masses over to your cause, then your preparation must include a message that connects with them, not merely relays your grievances, no matter how well intended and right they may be.

Victory is the goal. Acquiring that which is due you is the treasure. This is war and the powers you face will surely not concede anything without a demand, no matter how righteous your stance. Your efforts will not be made worthwhile because of your zeal or how justified you feel, but by the patient considerations you make before venturing forth.

Your Dreams Are As Valid As You Make Them